Seeing in the New Year at Shepheard’s 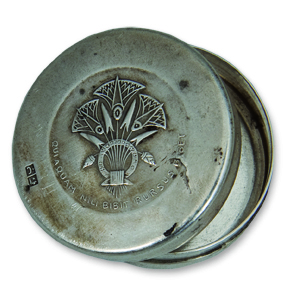 New Year’s Eve was always the biggest party of the year at Shepheard’s. We have this description from The Egyptian Gazette of what that particular night was like in 1921, when 1,200 revellers were gathered in the grand dining room:

“One must admit that the native waiters looked somewhat exasperated, but to have ﬁreworks let off under their noses and paper streamers twisted around their tarboushes at the very moment of serving four plates of hot soup was not . . . conducive to . . . equanimity of temper.” Bread rolls and cotton-wool pellets doused in water were thrown from table to table, reported the correspondent, while a jazz band belted out the latest favorites over the din. At midnight the lights were dimmed and two dozen white doves were released from a balcony above the hotel foyer. The effect, apparently, was rather spoiled by the wags who lowered a squealing pig on a rope from an upper fanlight. I wish I’d been there.

The little silver pill tin, above, was a gift to guests at Shepheard’s at Christmas in 1942 – presumably it came ready filled with a hangover remedy.

At the end of this year in which Grand Hotels of Egypt was published, I’d like to send out a sincere thank you to all and anyone who has picked up a copy, and to all who have taken the time to read this blog. Whoever you are, wherever you are, I wish you happiness in 2013. 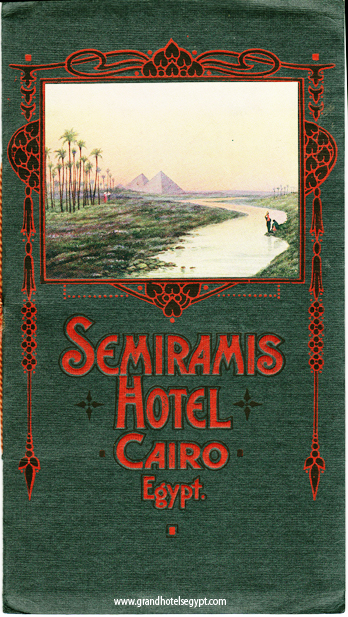 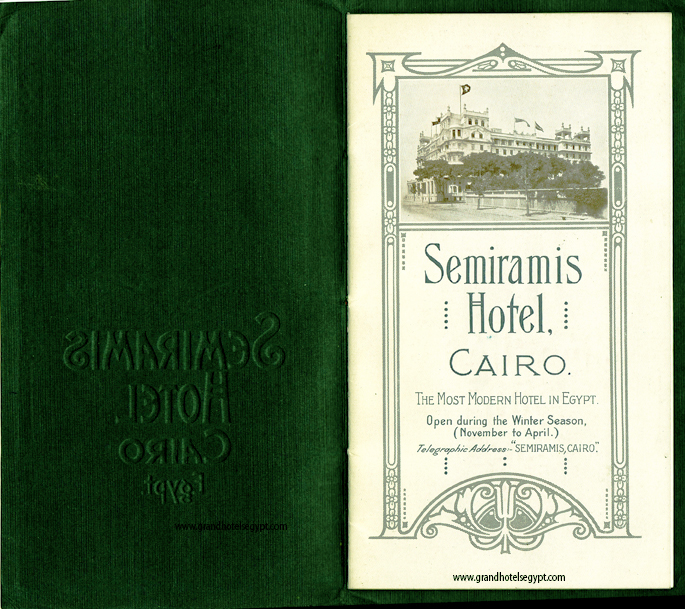 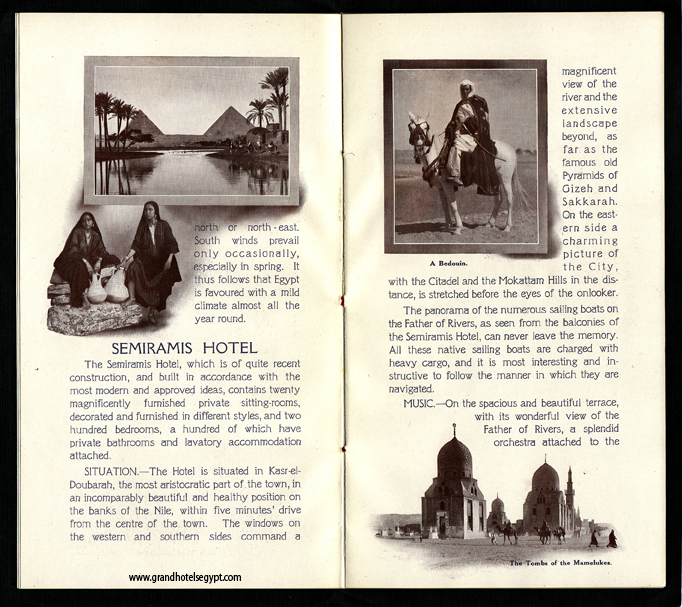 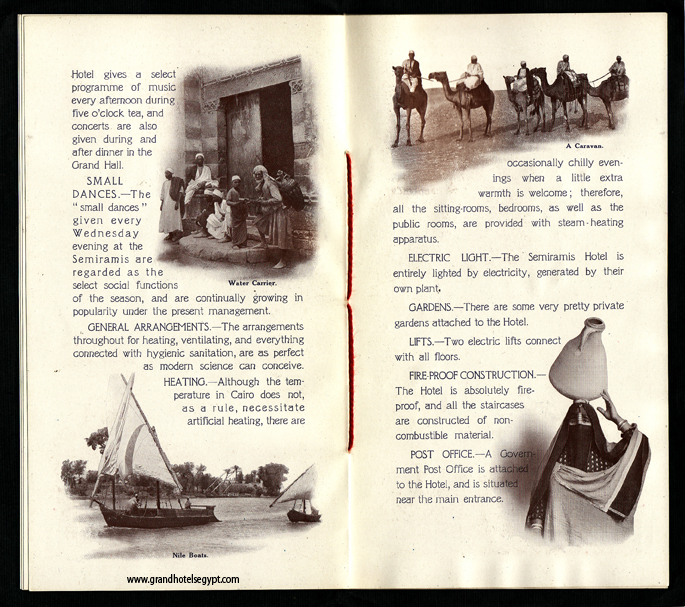 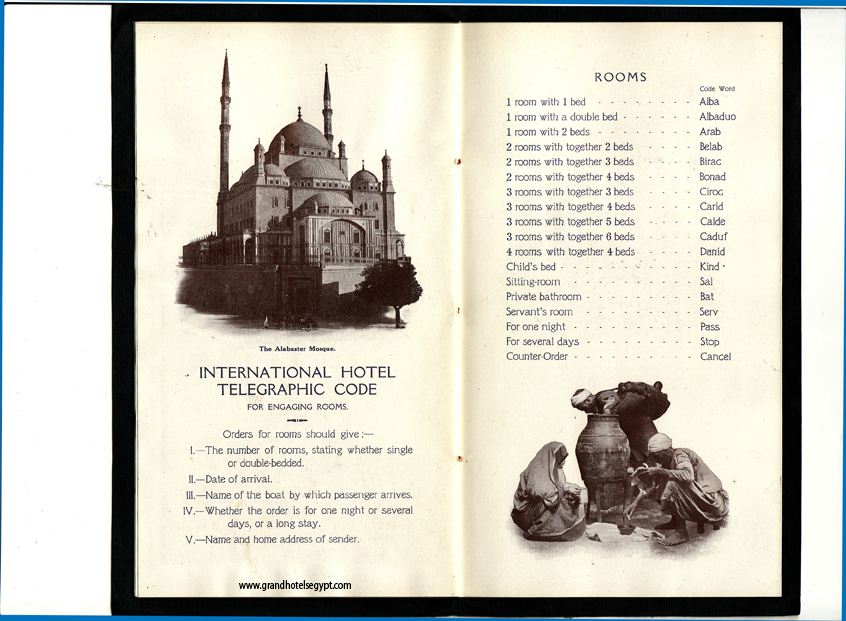 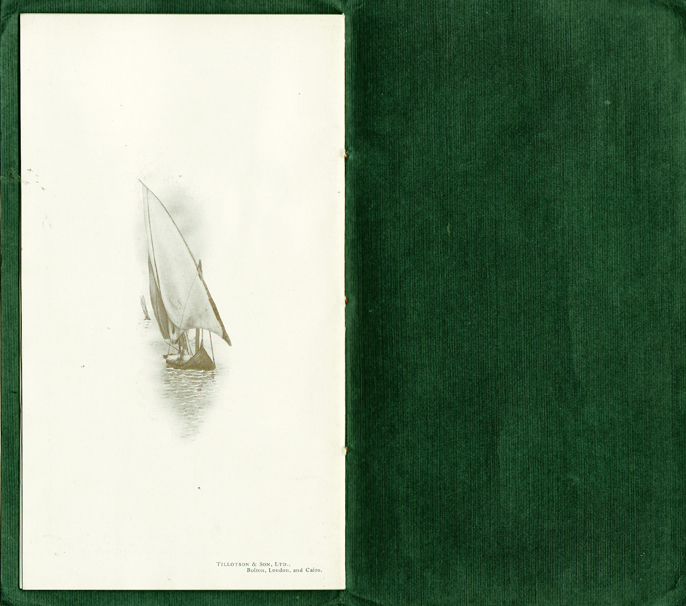 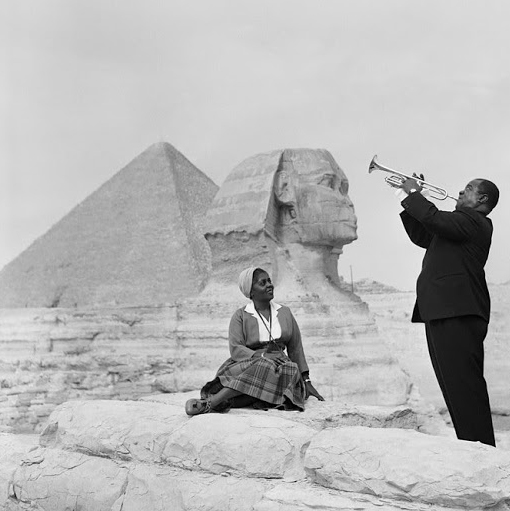 It’s just one of those odd combinations: Louis Armstrong and the Sphinx. But then why not? Everybody who can visits Egypt at some point in their lives, and everyone who visits Egypt visits the Pyramids. Except this was no casual holiday. Armstrong was in Cairo as a player in the Cold War. He was one of a number of Jazz Ambassadors sent out by the US State Department around Africa and the Middle East to counter Soviet propaganda, a programme that also included Dizzy Gillespie, Benny Goodman and Duke Ellington. In 1960-61, Armstrong and the All Stars performed in 27 cities in Africa, including Senegal, Mali, Sierra Leone, Liberia, Sudan and, as pictured above, Egypt. For more on America’s jazz diplomacy, click here. 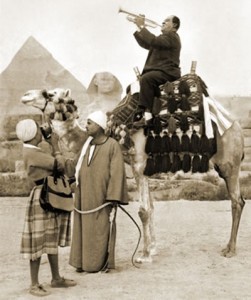 Last month I blogged about a set of Cairo hotel postcards painted by Swiss artist Willy Friedrich Burger. I was intrigued that he’d choose to paint hotels rather than the usual desert scenes, temples or mosques. Now I know why. Last week, through the magic of eBay, I bought a vintage brochure put out by Egyptian Hotels Ltd. The seller’s description was vague and he posted only photos of the covers, but these were attractive enough that I bid with no idea what was inside. I was delighted to find, then, that the booklet is full of illustrations, and they are all by WF Burger. Included are the images that appear on my postcards. It’s a pretty sure bet that Egyptian Hotels Ltd commissioned Burger to do its booklet then, pleased with the results, put out some of the paintings as cards. Here are the pages in full: 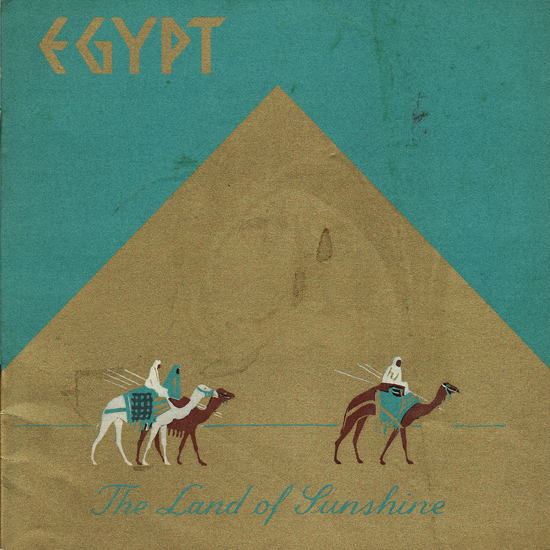 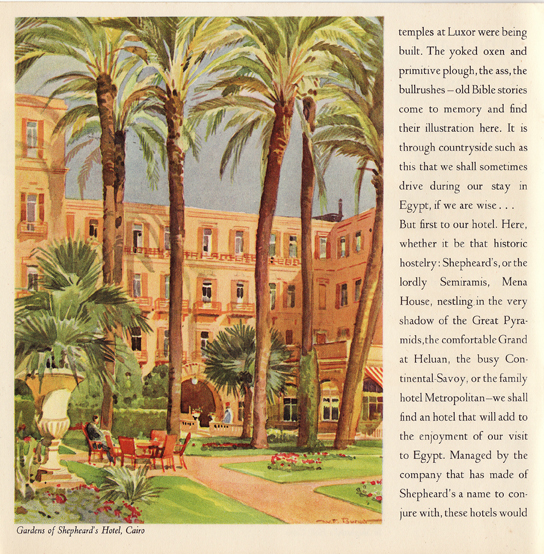 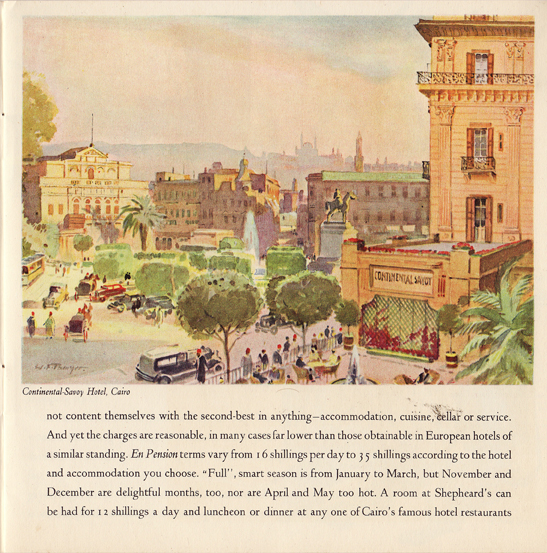 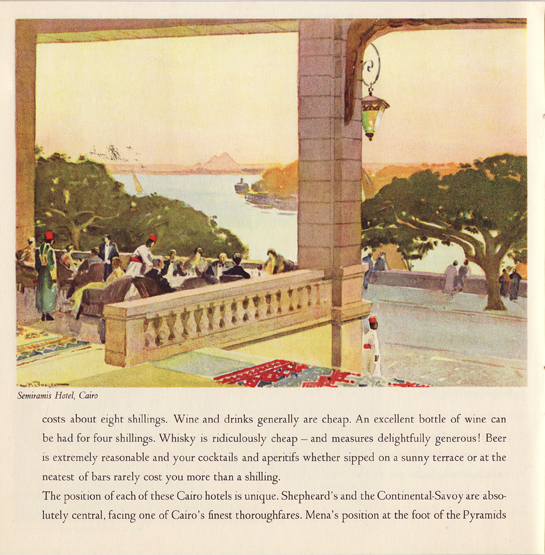 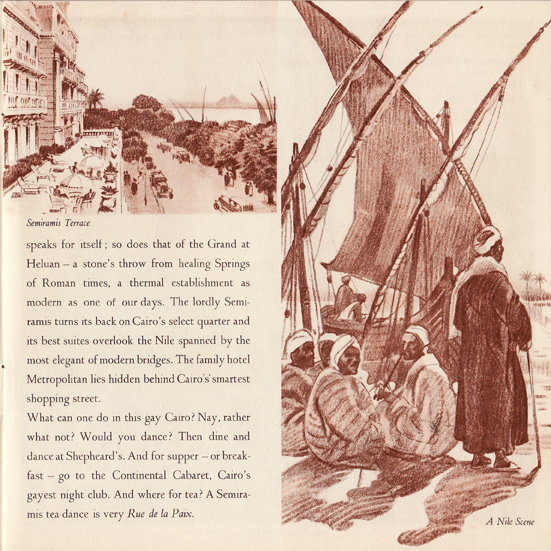 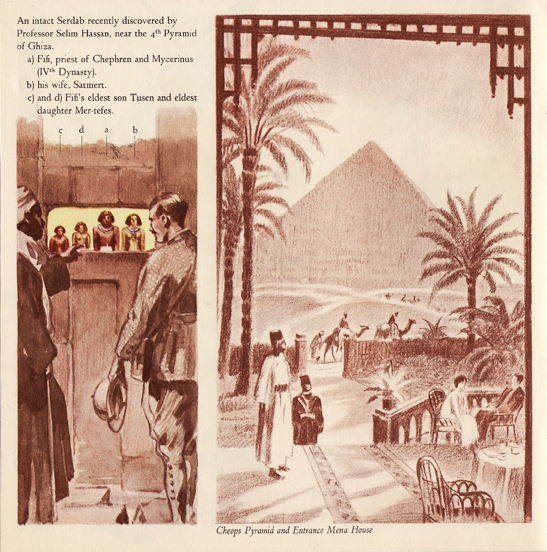 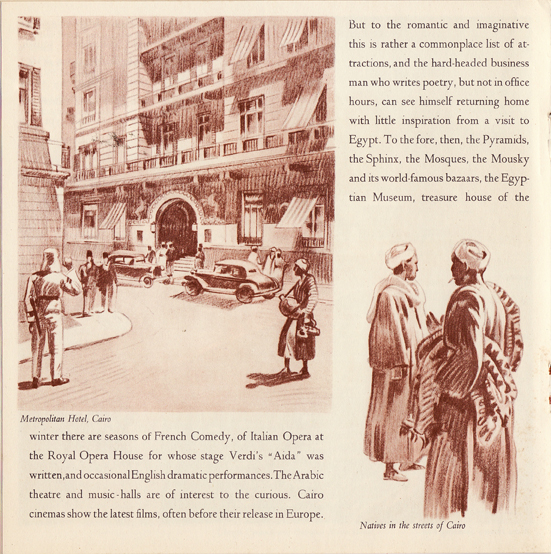 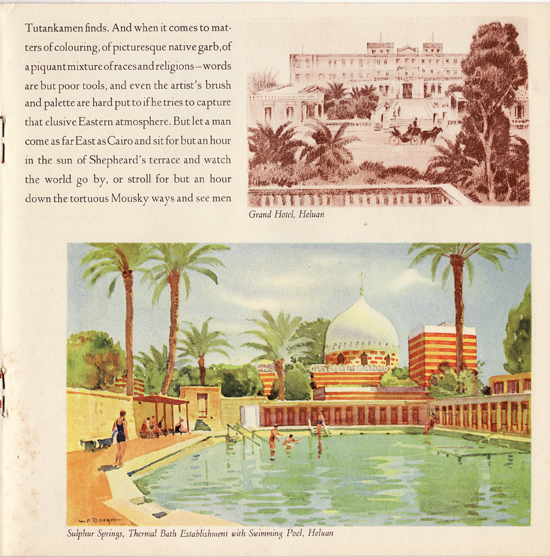 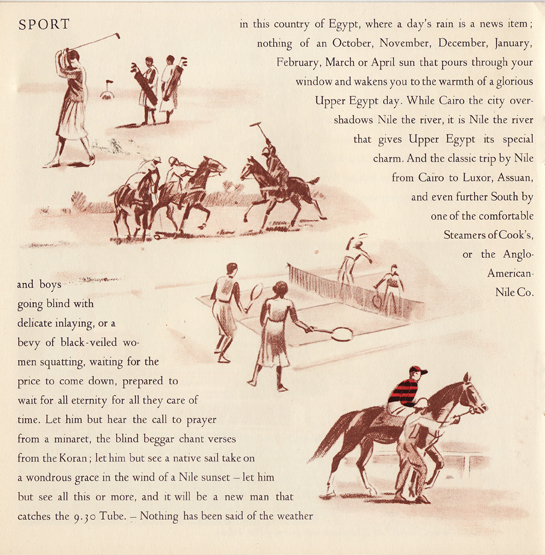 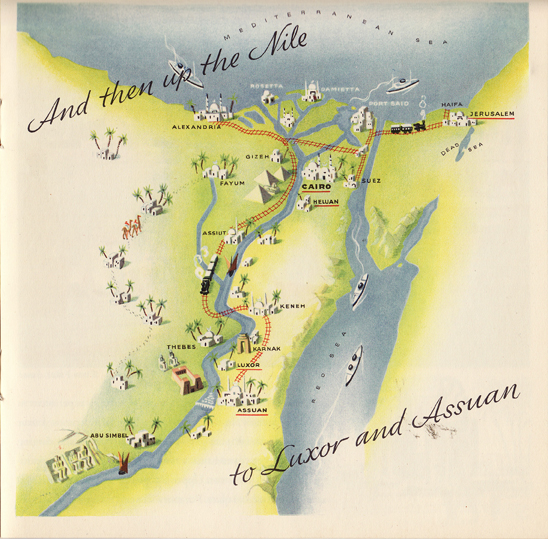 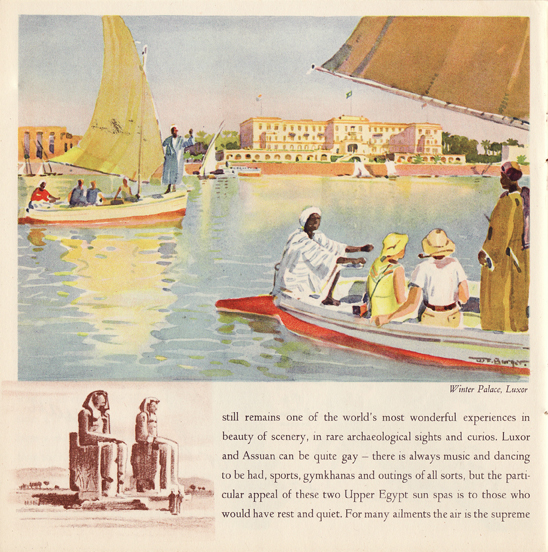 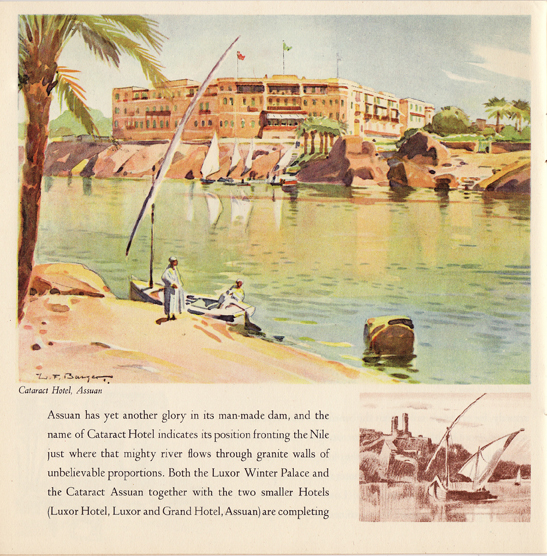 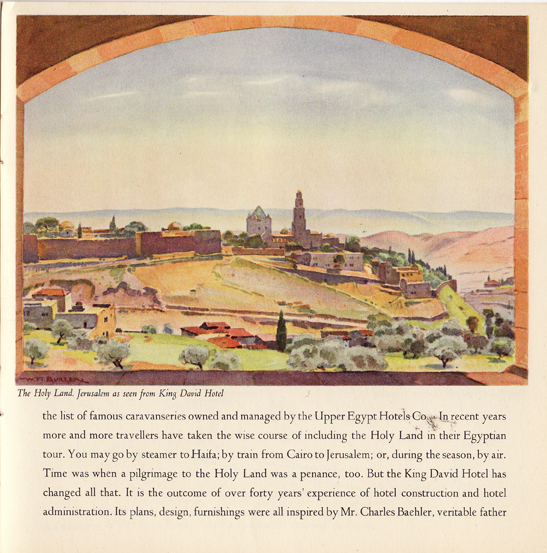 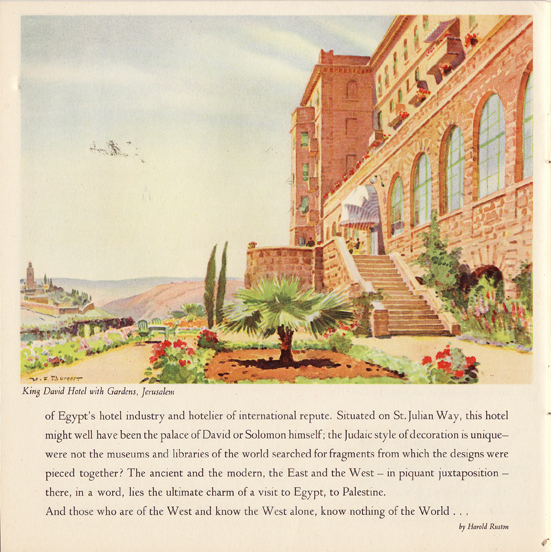 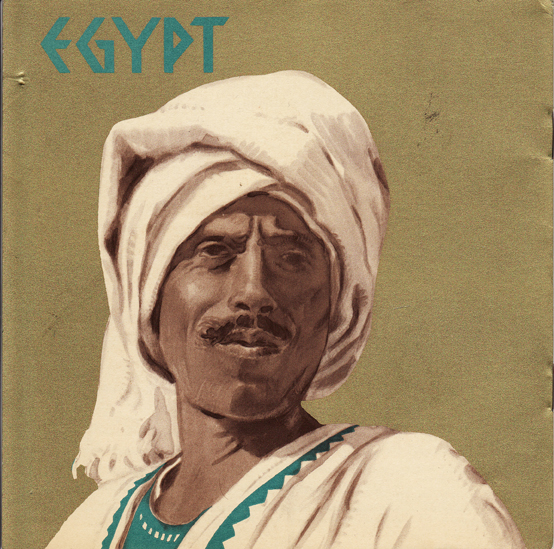