A great ball and a near drowning

In January 1869, exactly 150 years ago, Miss Riggs joined Thomas Cook’s very first tour to Egypt and the Holy Land. Travelling overland, the journey would take three months, there and back. Miss Riggs kept a diary of her adventure and I am going to be posting from it over the coming weeks. This is day thirty-nine.

Thursday, 4 March
Landed at 2 p.m., drove to Shepherds Hotel – not a bed to be had in the place. All the hotels full; a great ball taking place that night intended for the Prince and Princess of Wales; parties came from Suez, Alexandria, Ismailia, Port Said, paid for by the Viceroy. So all Mr. Cook could do was to obtain leave for us to sleep on the steamers another night … Capt. Reis came on board next morning but all the officials had been discharged. Louis the steward who was so attentive was present; he received £3 from us, Hassan £1. At Thebes we gave the sailors a Napoleon – they bought a sheep. Mr. Cook quite well now; he was nearly drowned on the Nile one Sunday when bathing with several of our party.

After three weeks onboard, sleeping in cupboard-sized cabins, Thomas Cook’s must have been desperate for a decent bed on dry land. How disappointed they must have been to find not a single hotel room vacant and to have to return to sleeping on the boat. This would be a recurring problem in the history of tourism to Egypt – at various times well into the 20th century Nile steamers were pressed into service providing for visitors who couldn’t get a hotel room.

Back down the Nile 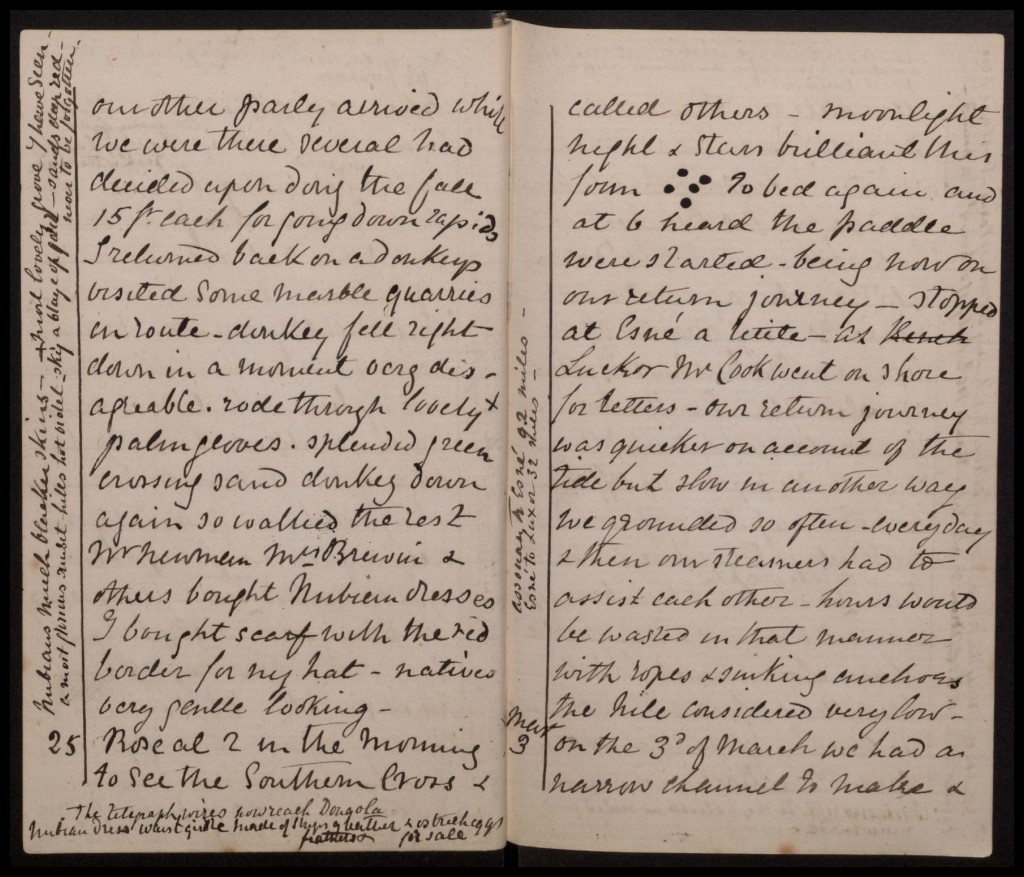 In January 1869, exactly 150 years ago, Miss Riggs joined Thomas Cook’s very first tour to Egypt and the Holy Land. Travelling overland, the journey would take three months, there and back. Miss Riggs kept a diary of her adventure and I am going to be posting from it over the coming weeks. This is day thirty-two.

Thursday, 25 February
Rose at 2 in the morning to see the Southern Cross and called others – moonlight night and stars brilliant. To bed again and at 6 heard the paddle were started – being now on our return journey – stopped at Esné a little – at Luxor Mr. Cook went on shore for letters. Our return journey was quicker on account of the tide but slow in another way; we grounded so often every day and then our steamers had to assist each other. Hours would be wasted in that manner with ropes and sinking anchors – the Nile considered very low.