Then and now: the Savoy

For the brief 16 years it was open to guests, the Savoy was Cairo’s most aristocratic hotel. It was a third venture for the indefatigable George Nungovich, the earliest of Cairo’s hotel czars (who I’ve blogged about earlier, here).

A palace belonging to Prince Djemil Toussoun didn’t meet requirements and the building and its grounds were bought up by Nungovich. The site was at the heart of the new Ismailia quarter, on Qasr al-Nil Street, overlooking the Rond Point Qasr al-Nil (see map below). Nungovich had the palace pulled down and replaced with a grand new building of three stories topped by a rotunda. 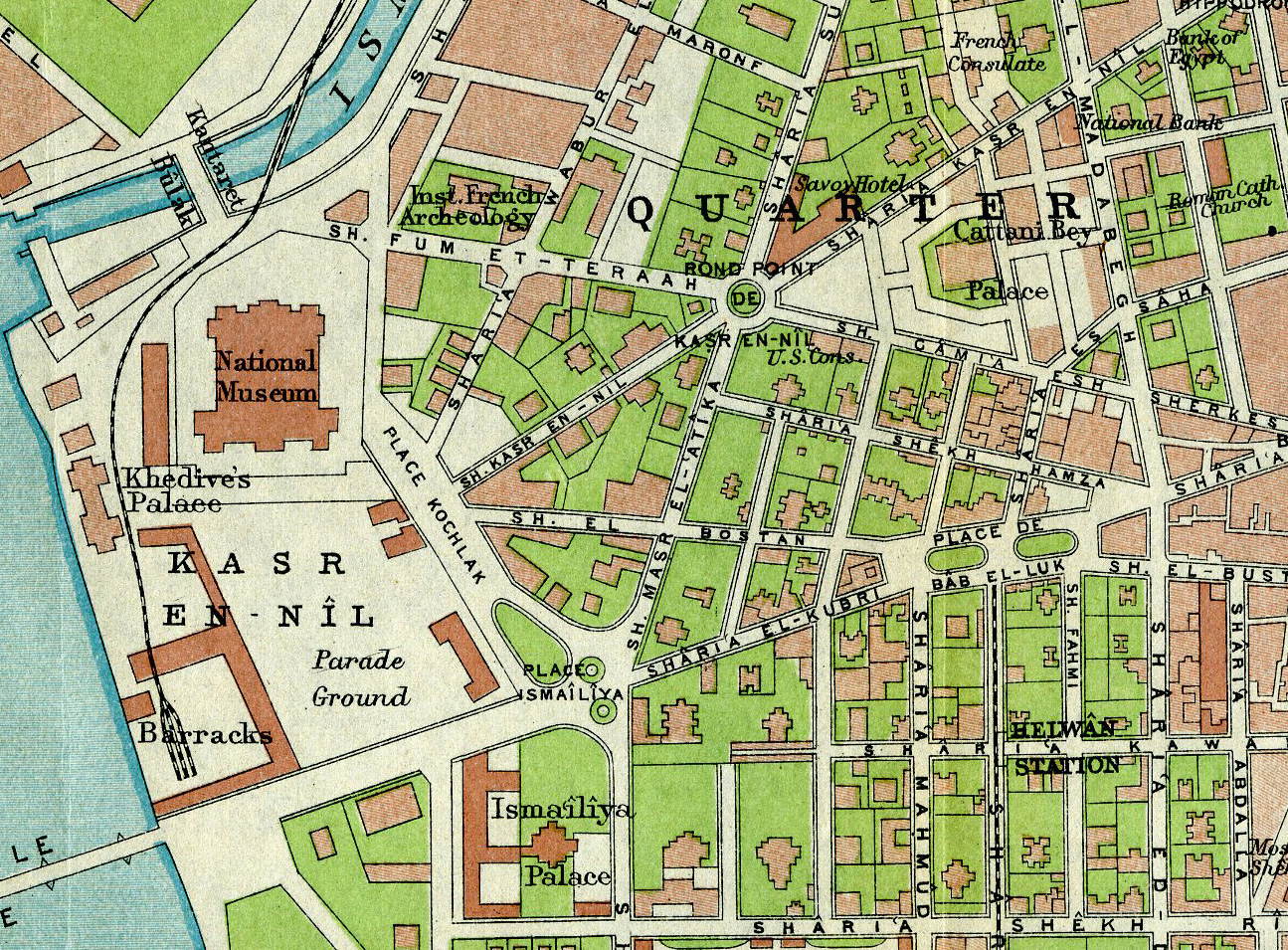 This he named the Savoy Hotel and it opened on 28 November 1898. It was described at the time as being remarkably modern with a large dining room and smaller restaurant, spacious lounges, smoking rooms, a reading room in ornamental Egyptian style, electric lift and a wide terrace overlooking Qasr al-Nil Street. Each bedroom had a ﬁreplace and new furniture from Waring and Gillow of Oxford Street, London, and there were suites with private bath and toilet on each ﬂoor. 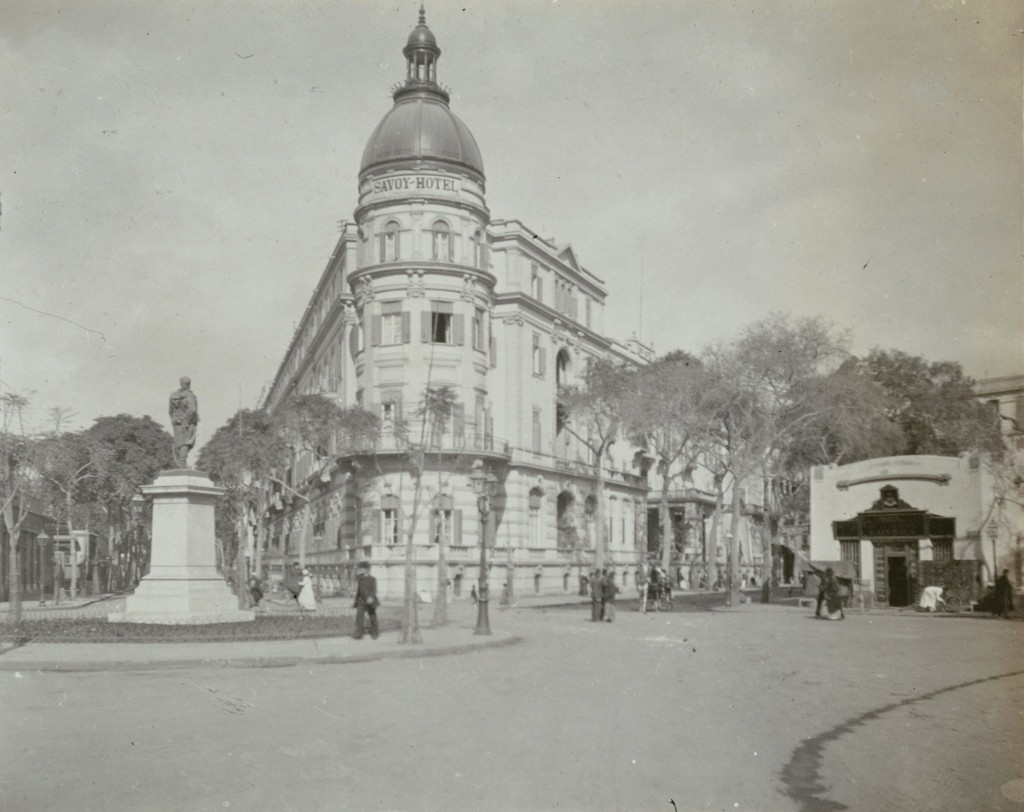 It was aimed at the class of people who might find Shepheard’s and the Grand Continental, then Cairo’s leading hotels, a bit vulgar. High society checking in at the Savoy in its early years included a young Winston Churchill, fresh from his adventures as a war correspondent in South Africa, Sir Benjamin Baker and Sir John Aird, the architect and contractor of the Aswan Dam, then under construction, and African colonialist Cecil Rhodes. When General Kitchener and his ofﬁcers arrived in Cairo triumphant after victory at the Battle of Omdurman in September 1899, they were honored with a grand banquet on the Savoy’s terrace.

Flags were ﬂown over the hotel whenever a royal was staying. First to be hoisted was the white elephant on red, in respect of the visit of the King of Siam. King Albert of Belgium, however, objected to the practice and demanded the ﬂag be removed or he’d leave. In 1905, when the white-haired, 80-year-old ex-empress Eugénie returned to Egypt 36 years after opening the Suez Canal, she took rooms at the Savoy. King George V and Queen Mary, then Prince and Princess of Wales, stayed on their way back from India a couple of years later. 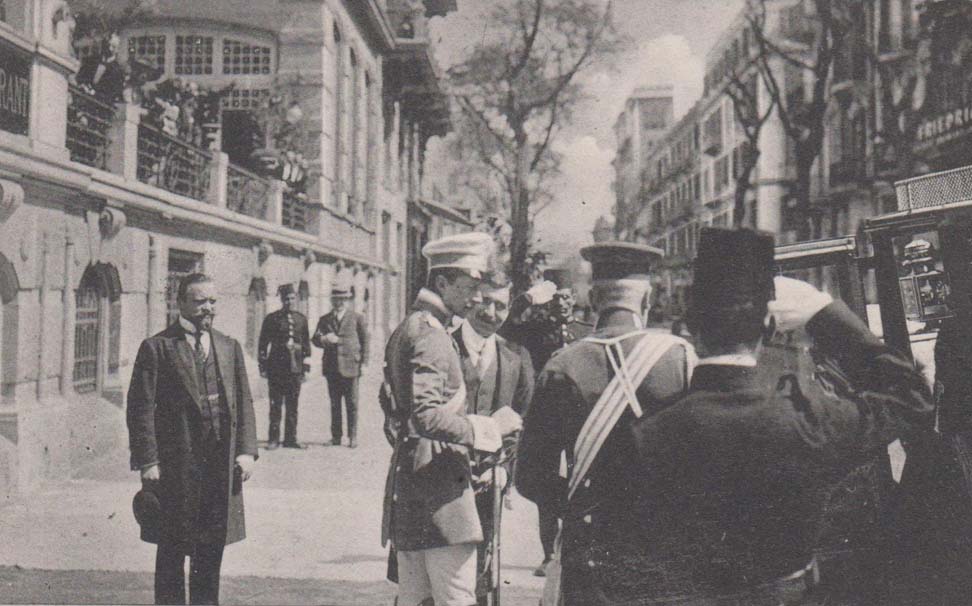 The Crown Prince of Germany being greeted by the manager of the Savoy, Auguste Wild

Shortly after the outbreak of World War I, in October 1914, the hotel was taken over by the British Army – as I noted in a previous post, TE Lawrence worked out of an office here from December of that year. When the war ended, the British Government elected to hold on to the hotel and it became a business address for British-owned companies. In 1924 it was sold to Charles Baehler, chief shareholder of Egyptian Hotels Ltd, who tore the building down. He replaced it with a grand commercial and apartment complex that still stands today facing onto what’s now Talaat Harb Square. Ironically, the Baehler Buildings, as they’re known, have themselves now become a totem of modern Downtown’s architectural heritage, cherished by conservationists, who are possibly unaware that the buildings in fact took the place of an establishment of far greater pedigree. 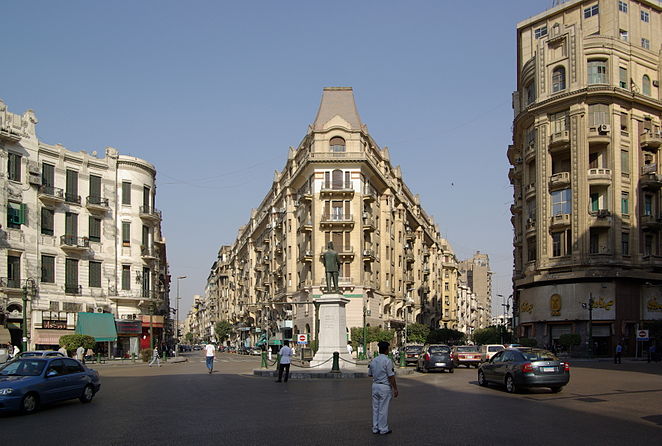 4 Responses to Then and now: the Savoy