Before the travellers’ cheque 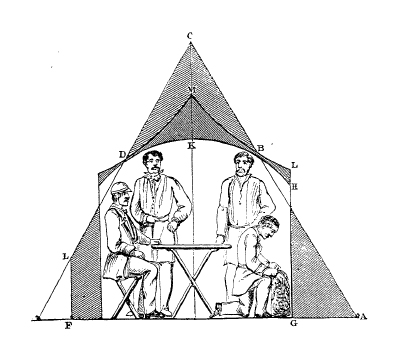 There’s a fascinating essay in the October 2011 issue of willfully eccentric US literary magazine The Believer entitled ‘How to Explore Like a Real Victorian Adventurer’. While researching a book about African exploration the author, Monte Reel, stumbled on a whole long dead and forgotten genre of ‘how to explore’ books. As he explains:

Victorian adventurers rarely took a step into the wild without hauling a small library of how-to-explore books with them. Among the volumes [Richard] Burton carried into East Africa* was a heavily annotated copy of Francis Galton’s The Art of Travel; or, Shifts and Contrivances Available in Wild Countries. Originally conceived as a handbook for explorers, and sponsored by England’s Royal Geographical Society, the book was required reading for any self-respecting Victorian traveler. Before rolling up his sleeves and getting down to the hard business of exploring, he could turn to page 134 to learn the best way to do exactly that:

When you have occasion to tuck up your shirt-sleeves, recollect that the way of doing so is, not to begin by turning the cuffs inside-out, but outside-in—the sleeves must be rolled up inwards, towards the arm, and not the reverse way. In the one case, the sleeves will remain tucked up for hours without being touched; in the other, they become loose every five minutes.

I share Reel’s enthusiasm having read lots of early Victorian travel manuals while researching Grand Hotels. Galton’s book, published in 1855 by John Murray, is a particularly fine read (you can download it from the internet in pdf form). Starting with the contents list, which includes entries for Swimming Rivers; Secreting Jewels; Securing Prisoners; Breaking in Oxen; and In Case of Death…

The section on starting a fire explains how this may be done by putting a quarter of a charge of powder into your rifle and on it a quantity of rag. On firing the gun straight up in the air the rag is shot out lighted and you must then run after it as it falls and pick it up quickly. Alternatively, notes Galton, he has read of the crystalline lens of a dead animal’s eye having been used with success in the same way as a magnifying glass. You just don’t get that sort of information in a Lonely Planet.

Other things learned. A good substitute for firewood is bones. A European can live through a bitter night on a sandy plain without any clothes beside what he has on if he buries his body deeply in the sand keeping only his head above the ground. To find honey, catch a bee, tie a feather or straw to its leg, throw it into the air and follow it to the hive. And if you’re worried about having all your valuables stolen, buy a few small jewels and put them in a little silver tube with rounded edges, then make a gash in your skin and bury it there leaving the flesh to heal over; the best place is on the left arm at the spot chosen for vaccination. The only drawback, says Galton, is if robbers are wise to this trick they might mince the traveller to pieces in search of further treasures.

* Burton was a repeat visitor to Shepheard’s hotel in Cairo. He lodged there in 1854 on his return from Mecca where he’d taken part in the Haj disguised as a Muslim Arab pilgrim. He also used the hotel as a base for his expeditions into Africa. The hotel’s owner, Samuel Shepheard thought Burton ‘a bit of a poseur’.