On the Nile at last 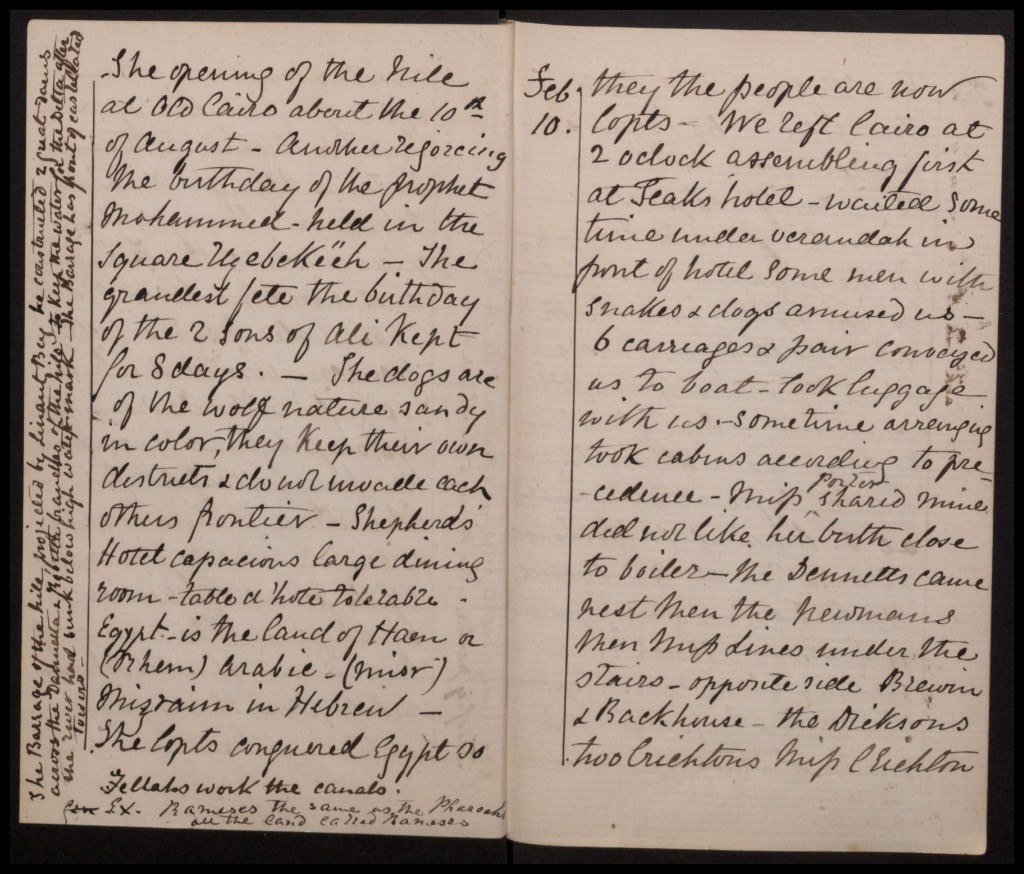 In January 1869, exactly 150 years ago, Miss Riggs joined Thomas Cook’s very first tour to Egypt and the Holy Land. Travelling overland, the journey would take three months, there and back. Miss Riggs kept a diary of her adventure and I am going to be posting from it over the coming weeks. This is day seventeen.

Wednesday, 10 February
We left Cairo at 2 o’clock, assembling at first at Teaks Hotel – waited some time under the verandah on front of the hotel –some men with snakes and dogs amused us – 6 carriages and pair conveyed us to boat – took luggage with us – some time arranging. Took cabins according to precedence – Miss Porter shared mine – did not like her berth close to the boiler – the Dennets came next, then the Newmans, then Miss Lines under the stairs – opposite Brewin and Backhouse – the Dicksons, two Crichtons, Miss Crichton, Mr. Chalmers, Mr. Cook; this filled the BENHA, the rest were in the BENISWAIF – 16 passengers in each. Passed Memphis in the night – good night – window and door open – berth about half a yard wide and about the same space for dressing.

This was Cook’s first organized tour to Egypt, remember. At this time tourism in Egypt does not exist and there are no scheduled cruises on the Nile. Instead, Cook has to charter two boats, the Benha and the Beniswaif, from the state-owned Azizieh Company. These steamers, both British built, are the property of Khedive Ismail. They are used for semi-regular passenger services on the Nile, departing Cairo once a month from November to February, but the departures were unreliable and the boats’ schedules didn’t make allowances for sightseeing stops. They do not sound particularly comfortable – Miss Riggs describes her bed as being half a yard wide, which is about 50cm, with the same for standing space.

I have no idea what or where Teaks Hotel was.