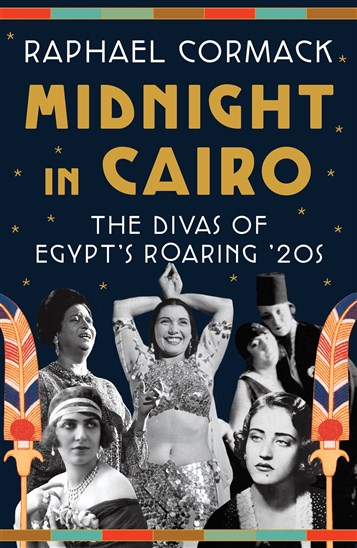 By chance or design, I don’t know, the Divas show (see previous post) coincides with the recent publication of Midnight in Cairo: The Female Stars of Egypt’s Roaring ’20s, a book by Raphael Cormack, an academic specialising in Egyptian theatre. It was released in the US in March this year (cover above), and in the UK and Egypt (cover below) a month or two later. I have to immediately own up to not having read the book. I bought it but my wife got to it first and she’s slowly making her way through it. Slowly, because every paragraph sends her to YouTube to stream some vintage Egyptian film or archive interview.

Cormack, currently a visiting researcher at Columbia University, was in Cairo in 2010, doing research for his doctorate degree on Egyptian theatre and found hundreds of sources in entertainment magazines from the early 20th century that revealed a time when ‘incredible stuff was going on in downtown theatres and cabarets and then cinema’. The book is structured around the lives of seven of the most prominent women in Egypt’s entertainment industry.

‘The stories of women’s lives in particular leapt off the page. Historians are often told that women’s perspectives are hard to find, but here they could not be ignored,’ he told jadaliyya.com. ‘I have tried to use their words and experiences to build a picture of Cairo’s nightlife and entertainment industry from the perspective of these fascinating women.’

The jadaliyya interview also includes an extract from the book’s introduction, which – I hope the publishers don’t mind – I abridge further here because it is a wonderfully evocative piece of writing and bound to appeal to anybody who appreciates the content on this blog and in my own books.

Introduction
In the late 1980s, the Egyptian writer Louis Awad looked back on his student days in Cairo between the wars. In particular, he remembered the nights he spent in the cafés of Cairo’s nightlife district, Ezbekiyya.

All you had to do was sit in one of the bars or cafés that looked out onto Alfi Bey Street, like the Parisiana or the Taverna, and tens of different salesmen would come up to you, one selling lottery tickets, another selling newspapers, another selling eggs and simit bread, another selling combs and shaving cream, the next shining shoes, and the next offering pistachios. There were also people who would play a game ‘Odds or Evens’, performing monkeys, clowns, men with pianolas who performed with their wives, fire eaters, and people impersonating Charlie Chaplin’s walk. Among all these, there was always someone trying to convince you that he would bring you to the most beautiful girl in the world, who was only a few steps away.

In the 1920s and 1930s, the centre of nightlife in Ezbekiyya was Emad al-Din Street – long and wide, with a tram line down the middle running north to the suburbs of Shubra and Abbasiyya. The intersection with Alfi Bey Street, where Louis Awad used to sit in the bars and cafés, was at the southern end of the action. In its heyday, Cairo’s nightlife could rival that in Paris, London or Berlin. Any resident of Egypt’s capital city in the early twentieth century could have claimed, with justification, to be living in one of the great cities of the world, at the centre of many different cultures.

Excerpted from Midnight in Cairo: The Divas of Egypt’s Roaring ‘20s. Copyright (c) 2021 by Raphael Cormack, published by Saqi Books in the UK, W. W. Norton & Company in the US and AUC Press in Egypt.