One for the world

My first post on this site back in November 2011 concerned Joe Scialom (that’s him, above). Joe was the legendary bartender in charge of the Long Bar at Shepheard’s from 1939 until 1952. In that time he became just about as famous as the hotel in which he worked. I found pieces on him in a 1952 edition of the New York Times and in the Washington Post in 1957 – these are where I drew my information from for what I wrote about Joe in Grand Hotels of Egypt. Since then I’ve got a hold of an issue of Collier’s magazine from 4 September 1953, which also has a piece on Joe, which I’m reproducing in full below because Joe seems such a swell guy everybody should get to know him a little more.

It’s titled ‘One for the World’ and it’s written by Robert Ruark, who would later make his name writing about big-game hunting in Africa and of whom his obituary in the New York Times said he was “sometimes glad, sometimes sad, often mad, but always provocative”. Sounds like perfect Long Bar company. 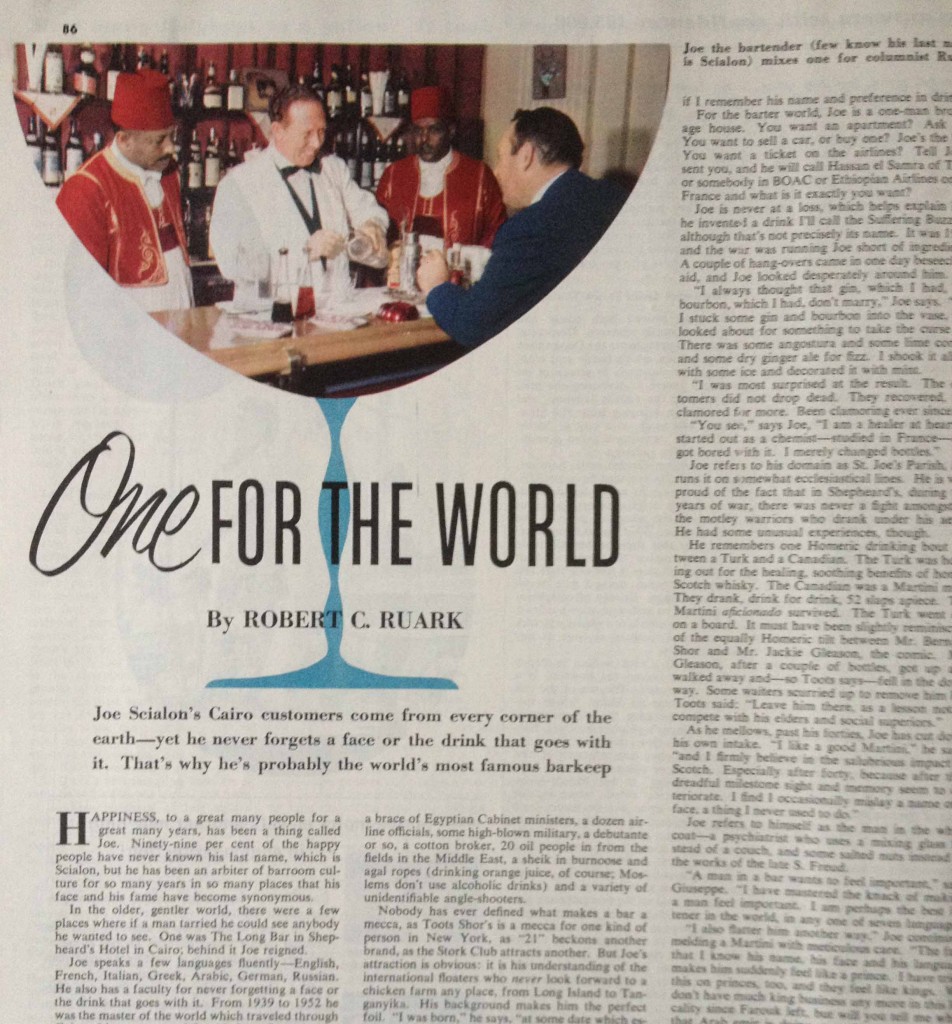 Joe Scialom’s Cairo customers come from all over the world – yet he never forgets a face of the drink that goes with it. That’s why he’s probably the world’s most famous barkeep

Happiness to a great many people for a great many years, has been a thing called Joe. Ninety-nine per cent of the happy people have never known his last name, which is Scialom, but he has been an arbiter of barroom culture for so many years in so many places that his face and his fame have become synonymous.

In the older, gentler world, there were a few places where is a man tarried he could see anybody he wanted to see. One was The Long Bar in Shepheard’s Hotel in Cairo; behind it Joe reigned.

Joe speaks a few languages fluently – English, French, Italian, Greek, Arabic, German, Russian. He also has a faculty for never forgetting a face or the drink that goes with it. From 1939 to 1952 he was the master of the world which travelled through Cairo. Messages were left with Joe. Commissions were given to Joe. Strange duties were entrusted to Joe. Joe became a kind of international bank, post office, underground and extension agent.

Shepheard’s is no more, having been set afire in 1952 by some of the rioting citizens of Egypt. But Joe has remained an institution. The tiny world created by crisscrossing airlines that pause in Cairo badly needed Joe. So the people who ran Shepheard’s created him a shrine in another of their hotels, the Semiramis. It is called Joe’s Bar, and if you are looking for somebody in Cairo, that’s where he’ll be, whether he drinks or not.

On an average evening in Joe’s you will see a brace of Egyptian Cabinet ministers, a dozen airline officials, some high-blown military, a debutante or so, a cotton broker, 20 oil people in from the fields in the Middle East, a sheik in a burnoose and agal ropes and a variety of unidentifiable angle-shooters.

Nobody has ever defined what makes a bar a mecca, as Toots Shor’s is a mecca for one kind of person in New York, as “21” beckons another brand, as the Stork Club attracts another. But Joe’s attraction is obvious: it is his understanding of the international floaters who never look forward to a chicken farm any place, from Long Island to Tanganyika. His background makes him the perfect foil. “I was born,” he says, “at some date which escapes me, of a Venetian father and a Russian mother, on the high seas. I became a legal Venetian but got my birth certificate in Egypt. I was named Giuseppe, after the captain of the ship I was born on. I am an American by adoption, and Scotch by absorption. I am married to a woman who is half French and half Algerian. I look like anybody’s cousin Joe, whether it’s Cousin José, Cousin Giuseppe, Cousin Yusuf, or what.

“I have worked in Paris, New York, London, Khartoum, Johannesburg, Algiers, Istanbul and Rome, not to mention Cairo. I have seen very traveller who drinks, at least twice: once when he comes in, and once when he comes back to see I remember his name and preference in drinks.”

For the barter world, Joe is the one-man brokerage house. You want an apartment? Ask Joe. You want to sell a car, or buy one? Joe’s the boy. You want a ticket on the airlines? Tell Joe I sent you, and he will call Hassan el Samra of TWA or somebody I BOAC or Ethiopian Airlines or Air France and what exactly is it you want?

Joe is never at a loss, which helps explain how he invented a drink I’ll call the Suffering Buzzard, although that’s not precisely its name. It was 1941, and the war was running Joe short of ingredients. A couple of hang-overs came in one day beseeching aid, and Joe looked desperately around him.

“I always thought that gin, which I had, and bourbon, which I had, don’t marry,” Joe says. “But I stuck some gin and bourbon into the vase, and looked about for something to take the curse off. There was some angostura and some lime cordial and some dry ginger ale for fizz. I shook it all up with some ice and decorated it with mint.

“I was most surprised at the result. The customers did not drop dead. They recovered, and clamoured for more. Been clamouring ever since.

“You see,” says Joe, “I am a healer at heart. I started out as a chemist – studied in France–and got bored with it. Merely changed bottles.” 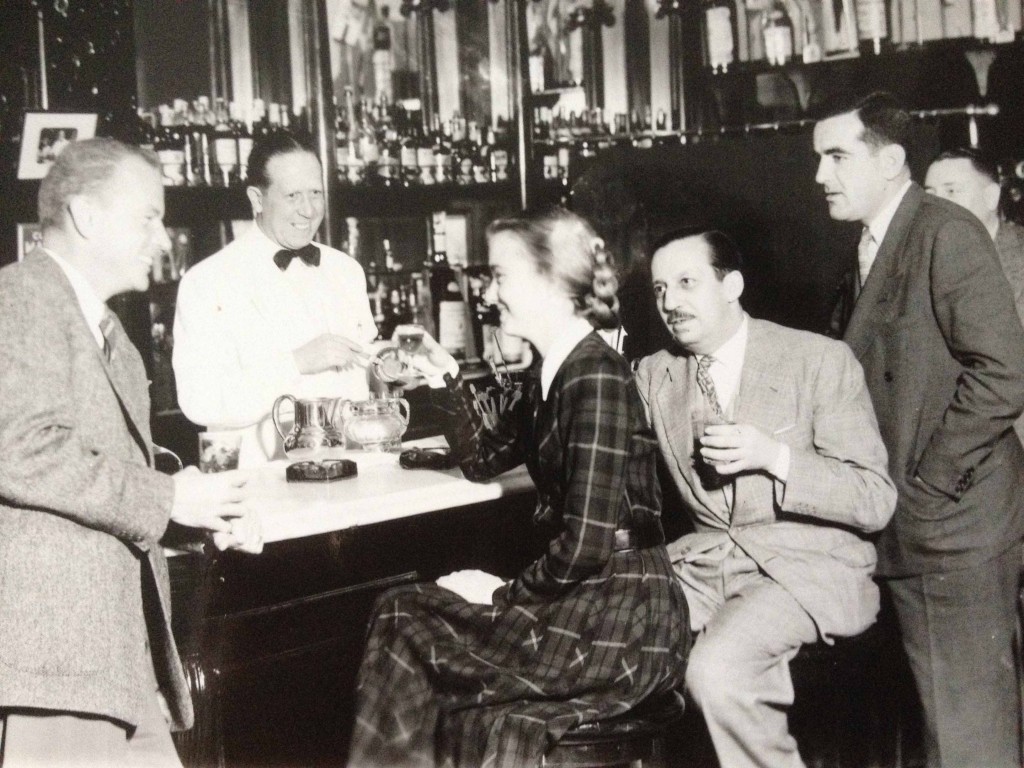 Joe refers to his domain as St Joe’s Parish, and runs it on somewhat ecclesiastical lines. He is very proud of the fact that in Shepheard’s, during five years of war, there was never a fight amongst all the motley warriors who drank under his aegis. He had some unusual experiences, though.

He remembers one Homeric drinking bout between a Turk and a Canadian. The Turk was holding out for the healing, soothing benefits of honest Scotch whisky. The Canadian was a Martini man. They drank, drink for drink, 52 slaps a piece. The Martini aficionado survived. The Turk went out on a board.

Joe refers to himself as the man in the white coat – a psychiatrist who uses a mixing glass instead of a couch, and some salted nuts instead of the works of the late S. Freud.

“A man in a bar wants to feel important,” says Joe. “I have mastered the art of making a man feel important. I am perhaps the best listener in the world, in any one of seven languages.

“I also flatter him in another way,” Joe continues, melding a Martini with meticulous care. “The fact that I know his name, his face and his language makes him suddenly feel like a prince. I have tried this on princes too, and they feel like kings. We don’t have much king business any more in this locality since Farouk left, but will you tell me what that Arab emir is doing over there with his lemonade if he doesn’t feel a psychic need to be at Joe’s, even if he doesn’t drink the hard stuff?”

The airplane has made things easier for folks with a psychic need to be at Joe’s; today people cross hi path much ore oftener than in the old days of the Orient Express and steamer travel. I was pushing off from Cairo not long ago and dropped in Giuseppe for a farewell pop. I swiped a line from the song. “One for my baby,” I said, “and one more for the road.”

Joe looked his mystic look, and the blue stone in his ring twinkled when he poured the drink.