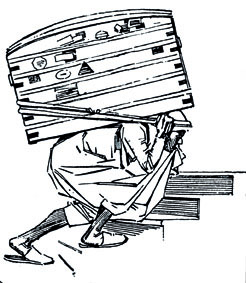 There are strange chambermaids at Shepheard’s Hotel in Cairo. A lady declares that the one who waited on her room and attended to all the duties of the calling, even to making the beds was a Frenchman, dressed as if for a dinner party, with white waistcoat and dresscoat, and having the air of a refined and educated gentlemen. It was really embarrassing to accept his services in such a capacity. One lady, arriving at the hotel, rang for the chambermaid, and this gentleman presented himself. Supposing him to be the proprietor, at the very least, she said, “I wish to see the chambermaid”. “Madam,” said he, politely, in his very best English, “Madam, she am I!”

It shows just how famous Shepheard’s was at this time that a regional paper in northern England would carry stories about the hotel and could assume that its readers would know the place they were writing about.