When Shepheard’s went up in flames back in January 1952, one of the notable losses was the hotel’s set of Golden Books, the ledgers in which decades of distinguished guests had been invited to sign their names. It used to be common practice for hotels to keep VIP guestbooks and use the names they contained as marketing collateral, to be listed in ads and promotional booklets. But it’s not just Shepheard’s Golden Books that were lost, because I don’t know of any surviving examples from any of Egypt’s grand old hotels – except, that is, for one.

It comes from the Winter Palace and covers the years 1920-1935, an exciting time coinciding as it does with the discovery of Tutankhamun’s tomb and the ten years of excavations that followed. I learned of the guestbook through an essay written by André Wiese, curator of the Egyptian Department at the Museum of Ancient Art and Ludwig Collection in Basel. He discovered the existence of the guestbook back in 1991 when he was preparing an exhibition devoted to Seti I. It was in the possession of Carmen Heusser, the daughter of Swiss hotelier Anton Badrutt, who managed the Winter Palace between 1920 and 1935.

Wiese was allowed to study the book and subsequently wrote a 22-page study (in German) that was published in an academic journal in 1998. He kindly sent me a copy, which I’ve translated. I’m not going to run the whole text because it’s 5,000 words long, but I will summarise it. 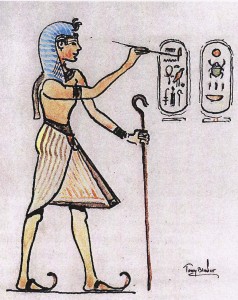 ‘Bound in parchment and leather, here we truly have a piece of history in front of us!’ Wiese begins. Inside, the fly-leaf is decorated with a hand-painted image of a cheery Tutankhamun (above) done by Austrian artist Anton ‘Tony’ Binder. Binder (1868-1944) was an Orientalist painter, who lived in Alexandria but travelled around Egypt gathering material for his oils of Egyptian landscapes and interiors. Some of his work was also printed on postcards. In addition to the Tutankhamun drawing, the book also contains sketches by him of hotel guests Howard Carter and Bernard Shaw. 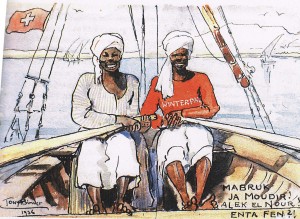 According to his daughter, Badrutt liked collecting autographs, so this guestbook was something of a personal affair. As well as signatures it also contains notes of thanks addressed to Badrutt in person, and a number of photographs, including several of Carnarvon and Carter dated ‘Winter 1922-23, Luxor’. One is the famous image of Carnarvon and Lady Evelyn on arrival at Luxor station on 23 November 1922, being met by Carter and the Governor of Qena, just three days before they breached the tomb.

Also slipped into the guestbook is a menu for Christmas dinner on 25 December 1923 decorated with a guardian figure from the tomb of Tutankhamun, depicted befoe and after the dinner, in the latter case with a huge fat belly and smoking a pipe. 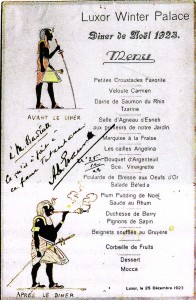 Most of the space though is taken up with signatures, and it’s some collection. Wiese lists them: there are the statesmen, including former French prime minister Georges Clemenceau, Czech president Tomas Masaryk and ex-Tsar Ferdinand of Bulgaria – who were all in residence at the hotel at the same time; and the crowned heads, such as crown prince Edward of England, visiting in April 1930, who, six years later would be become king of England only to step down within the year, as well as the Belgian king and queen, Albert and Elizabeth, and the crown prince of Sweden, the future King Gustav VI Adolf of Sweden.

There’s an entry in the guestbook on 8 March 1929 by Rudyard Kipling and signatures from November of that year of the American silent film star Douglas Fairbanks and his wife, the equally famous Mary Pickford (there’s also a photograph of the pair with Anton Badrutt). German novelist Thomas Mann, who spent 10 days at the hotel, signed the book on 6 March 1930 (and left a lengthy inscription, which I was unable to translate), while George Bernard Shaw wrote on 26 December 1932, “I cannot make up my mind whether Luxor is the hottest place on earth or the coldest”. 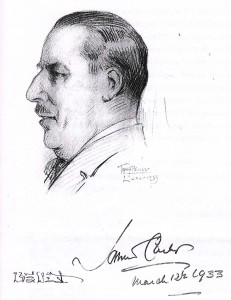 Other random names and the dates they signed the book include John D Rockefeller Jr (15 Feb 1929), Evangeline Lindbergh, mother of Charles (24 Jan 1929), Somerset Maugham (14 Dec 1929), Nelli Melba (18 Feb 1930) and World Champion Heavy weight boxer Gene Tunney (23 Feb 1931), who added the message: ‘The charm of this lovely Winter Palace is only equalled by that of its guiding spirit Mr AR Badrutt’.

Wiese includes a lot of background on Badrutt, but I’ll save that for a future post. 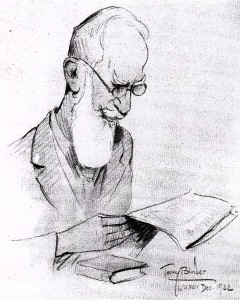 Recently, I thought I might travel to Basel to see this wonderful piece of history for myself, so I emailed André Wiese to ask if he could put me in touch with Ms Carmen Heusser. His reply was tragic:

Thanks for contacting me again. I have no good news. Unfortunately the lady suffers in the meantime heavily from dementia and the guestbook has disappeared recently when she moved to the home for old people. There exists only our digital copy in the museum.

And then there were none.

4 Responses to The Golden Books