I knew that Shepheard’s was severely damaged by fire in 1868 from a dramatic illustration that ran in the London Illustrated News, below. But I was never able to find any further details, so the event only receives a passing mention in my book Grand Hotels of Egypt. Recently, however, I managed to find not one but two newspaper accounts of the event, one of which, from the 21st August 1868 edition of The Coventry Herald and Free Press, and Midland Express I’m going to post in full because it’s full of interesting detail. For instance, in 1868 Shepheard’s had a stock of wine that was worth fully half as much as the entire hotel? 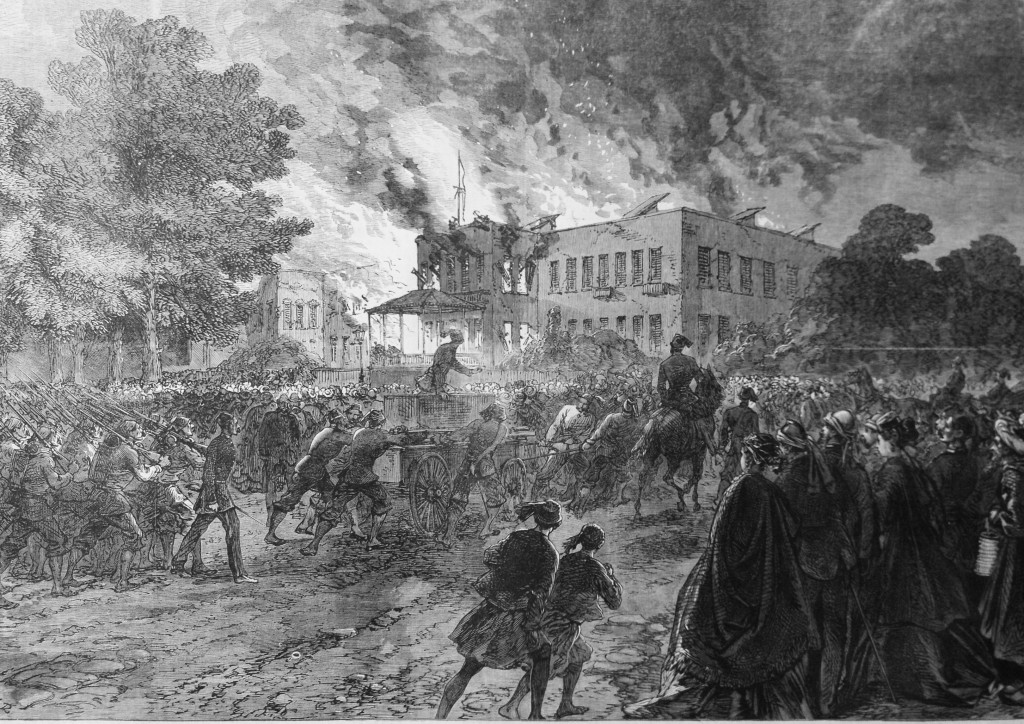 A correspondent at Cairo, in a letter dared the 7th furnishes some particulars of the burning if Shepheard’s Hotel, which occurred on the previous night: “The building was constructed by Mohamed Ali for a school of languages on the site of a former building occupied by Napoleon as his headquarters while in command of the French expedition in Egypt; and a well now subsisting in the garden of the hotel is said to be the identical well in which the assassin of General Kleber momentarily concealed himself after stabbing the general and those who were in the company walking up and down one of the garden paths. On the breaking up of Mohamed Ali’s schools the building passed to Kamal Pasha, his son-in-law, and now one of the Sultan’s ministers. In 1850 Abbas Pasha, then Viceroy of Egypt, rented it from Kamil Pasha, and granted it, at the suggestion of Sir Charles Murray, then Her Majesty’s agent and consul-general in Egypt, for a nominal rent, to the late Mr. Shepheard (who resided until his death at Eathorpe, near Leamington), for the purpose of a hotel. In a few years Mr. Shepheard was enabled to retire, and in 1859 he transferred the hotel for a premium, it was understood of £12,000 to its present proprietor, Mr. Zech, who has further laid out much money upon it. It is said he is insured in French offices to the amount of £14,000. The building was of two floors in height, and in plan in the form of a hollow square round an inner quadrangle, which was laid out as a garden. On the lower floor was a wine closet containing a stock of wine valued at between £6,000 and £7,000. 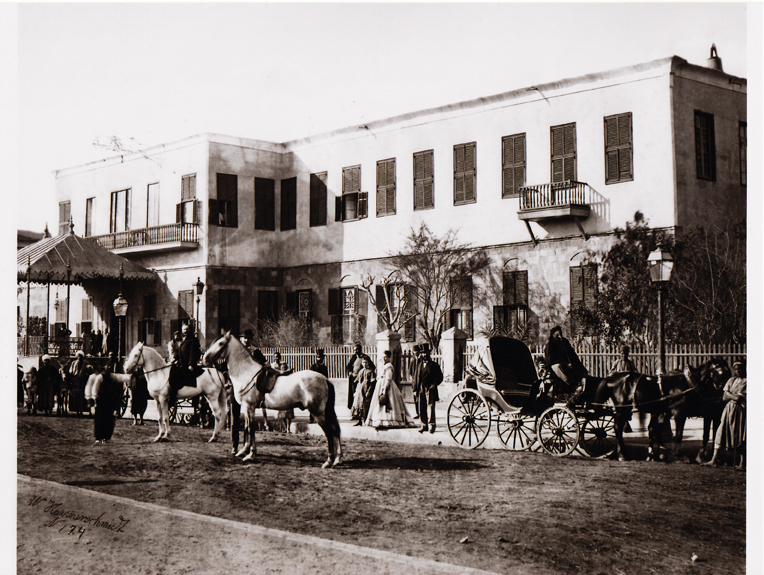 The fire began at half-past eleven last night, the first alarm preceeding from an explosion from a store closet containing parafine – or, as it called in Cairo, gas – candles, and other combustible matters. The servants were at the moment preparing to close the house. In an instant flames shot forth in several directions at once. The people of the house could do nothing, there having been no fire-extinguishing apparatus of any kind on the premises. The preparations against fires are so ineffectual in Cairo that it was stated to be two hours before an instrument, consisting of a hand-carried box with a pump in it, which passes for a fire engine, arrived. The stream projected by such a pump is certainly not thicker than an ordinary hand garden pump. Fortunately there was no wind. Had the northerly wind which had been blowing for some nights previously continued, Kamil Pasha’s house must have gone, and very probably the new hotel, constructed and furnished at a cost of £120,000, and not yet completely finished. On visiting the scene at eight O’clock this morning, I found the east and south fronts a roofless burnt-out ruin – thin columns of smoke curling up here and there from the materials which had fallen in between the walls. The north and west blocks are uninjured, but the furniture they contained having been thrown as best it could, out of the windows, will yield little salvage.

Some suspicions are entertained that the fire may have been the act of an incendiary. Fires are of rare occurrence in Cairo; but it so happens that for the last nine days a fire has been reported in different parts of the town every evening. There is a great discontent among the people at the arbitrary exactions to which they have been subjected in order to satisfy the Pasha’s requirements for meeting his liabilities at home and abroad, while at the same time they hear of his wasting enormous sums of money at Constantinople. A firdeh or trade tax of 8 1/3 per cent per annum on the profits from trade, calculated in many instances much in excess of the true profits, and weighing with excessive hardship on a large class of the inhabitants of the town, has lately been imposed.

The Glasgow Daily Herald of Wednesday 2nd September 1868 ran a very similar story, probably from the same correspondent, but it chose to include this excellent detail:

I am told of one guest in the hotel putting an appearance, in sorry plight, at one of the windows flanked by flames from others on either side of it, and by aid of extemporised ladders and mattresses and things for his to jump on, he was got out in safety and nudity.

The hotel was not out of commission for too long because just a few months later, in January 1869, travel impresario Thomas Cook was in Cairo leading his very first Egyptian tour party, and from a diary left by one of its number, we know that Shepheard’s was up and running again by this time.

One Response to Fire in Cairo