In January 1869, exactly 150 years ago, Miss Riggs joined Thomas Cook’s very first tour to Egypt and the Holy Land. Travelling overland, the journey would take three months, there and back. Miss Riggs kept a diary of her adventure and I am going to be posting from it over the coming weeks. This is day eight.

For the past two days Miss Riggs and the rest of her Cook-led party have been making their way south down through Italy. On the morning of 30 January they left Turin for Ancona, crossing the plains of Lombardy, and via Foggia arrived at their destination of Brindisi on the southeast coast early on 1 February. 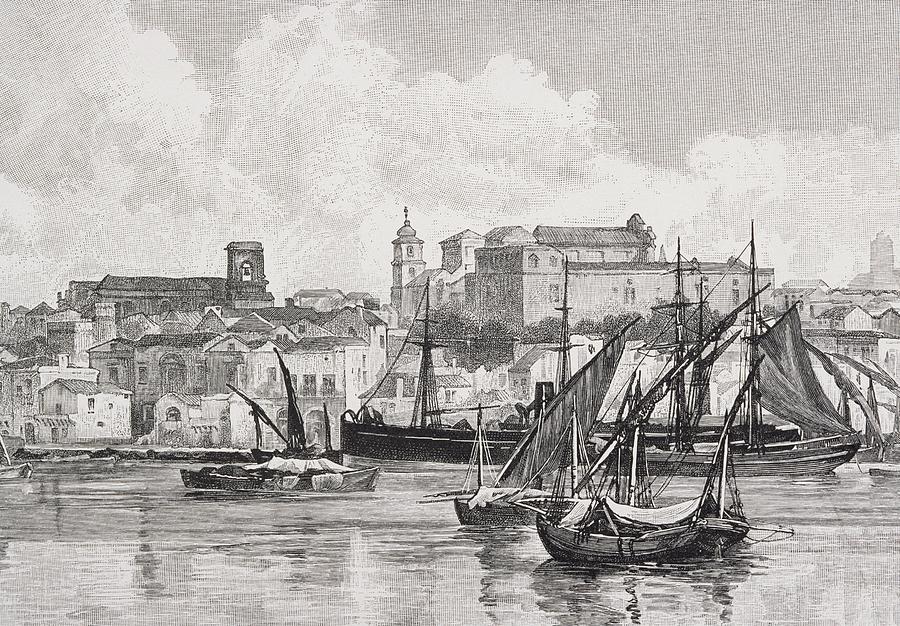 Monday, 1 February
… Could hardly fancy myself so far south as Otranto – the town immense walls, narrow streets; very ancient. Aspect of people dark and Moorish – fine faces. Men with large cloaks and hoods – great concourse of people looking at our crammed omnibus with much surprise. It looked a dangerous place. Could not at first find out hotel; dismounted and then mounted again for the hotel d’Angleterrre on the quay. Rooms sandy floors, not comfortable – glad we had not to sleep here. Mr. Cook left us to go on board our steamer, the Brindisi, to secure our berths. Brindisi 1420 miles from London. We lunched at hotel and then took a stroll around the town and then proceeded to the steamer in little boats; very dark. Set sail at 9 in the evening – Captain Young, and handsome good vessel, cabins opening into the saloon. Mine and Miss Porter’s did not do so, not so comfortable in consequence; very little room for storage in the cabin – mine top berth, but could not have round window open – very close. Deck good – fine evening, bright stars. All stayed on deck some time, all in good spirits notwithstanding the wind seemed up for a breeze.

So the party has now crossed Europe and arrived at the port of Brindisi [pictured above], where, a bit confusingly, they board a steamer also called Brindisi. Miss Riggs mentions Otranto, which is a port just a little way south of Brindisi. I’m not sure why it would be important to her but, being religiously inclined, possibly she knows of the story of the ‘Martyrs of Otranto’, 800 citizens who were beheaded after refusing to convert to Islam when the Ottomans captured the town in 1480.