In January 1869, exactly 150 years ago, Miss Riggs joined Thomas Cook’s very first tour to Egypt and the Holy Land. Travelling overland, the journey would take three months, there and back. Miss Riggs kept a diary of her adventure and I am going to be posting from it over the coming weeks. This is day eleven.

Thursday, 4 February
On deck in good time as by 7 we are to leave the boat at 8. Lord Gower quite a young man, very fair, with companions and courier on our steamer – on his way to the Prince of Wales. Wee were very glad and thankful to get out of our cabins. Good view of Alexandria from the sea where we lay to, some distance out of port. The island of the Pharos and Pompey’s Pillar conspicuous and palace of the Viceroy = quite a strange novel and picturesque scene and tumultuous the men in little boats surrounding our steamer for disembarkation, tittering shrieks in an unknown tongue – Arabic.
The pilot came on board in a little sailing boat, a brown cloak and hood and bare legs – we let all the other passengers go off first, then a commissionaire from the Hotel de l’Europe came on board to us which saved us much inconvenience, but however with all that our luggage was seized by main force, very nearly falling into the sea, by men of all color and casts – never to be forgotten. The little boats conveyed us to terra firma, then we went o have our passports vised, then commenced a babble again, all claiming the luggage for the hotel. At last rushed into carriage and we drove off to the hotel through thick mud which all the streets in Alexandria are in the rainy season. Hotel situated in the Square. 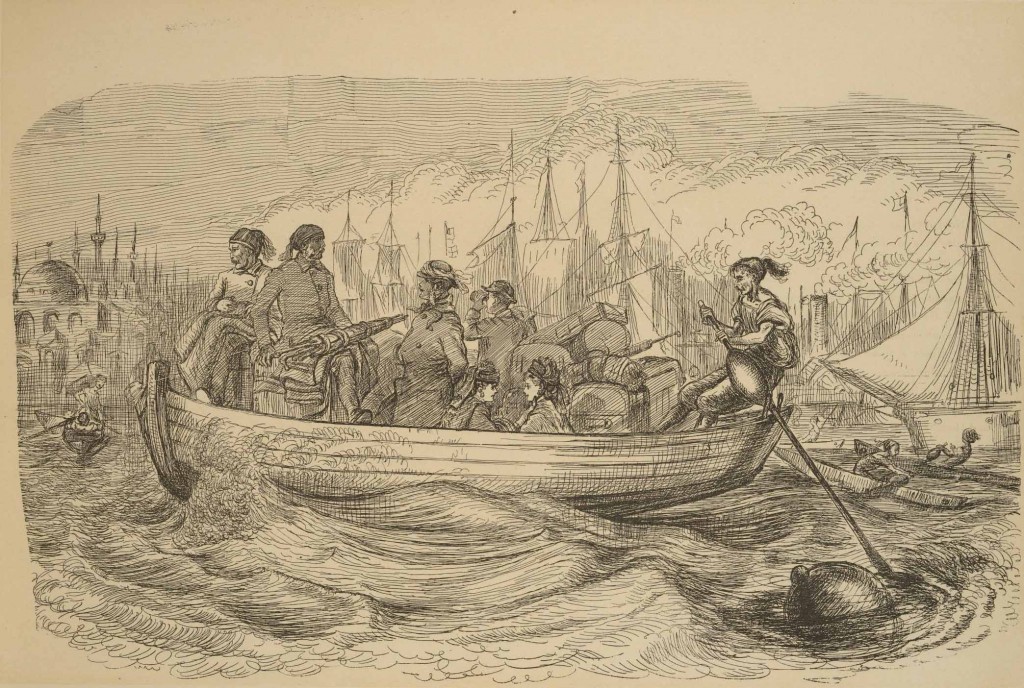 Almost every 19th century traveller arriving at Alexandria wrote about the chaos that met them in the harbour. Incoming steamers would be met by flotillas of small boats carrying touts for local hotels and dragomans battling to claim the new arrivals. Once luggage had been sorted and reclaimed it would be a donkey ride to the city’s main square, the Place des Consuls – now Mohamed Ali Square – which was where in 1869 all the hotels were.