In January 1869, exactly 150 years ago, Miss Riggs joined Thomas Cook’s very first tour to Egypt and the Holy Land. Travelling overland, the journey would take three months, there and back. Miss Riggs kept a diary of her adventure and I am going to be posting from it over the coming weeks. This is day twenty-six.

Friday, 19 February
Started at day-break and arrived at Thebes by 12 at noon. Ran aground often on our way – the river getting shallow at Keneh 2 miles from the shore. We saw pottery made with the wheel, very quickly and prettily. Dancing girls there which the gentlemen patronized. Luxor our aim and arrived at last – landed and proceeded en masse to the consul who spoke English very well. A low and roomy house facing the landing place. We were sorry to find that owing to our accident of paddle e had missed the grand illuminations at Karnak, which took place in honour of the Prince and Princess of Wales the evening before. Consul’s name Mustapha Aga – wrote all our names in his book and then read the entries of the Royal party.

The Prince and party had left this morning for Assouan, He enquired after our party and sorry we had met with an accident. Got saddles out of boat and proceeded to Karnak on donkeys – 2 miles ride, sandy and dusty.

Spent about 3 hours at Karnak and then returned on our donkeys getting to sunset – lovely sky. Backsheesh men very troublesome – with much struggling managed to get our saddles on board. Table d’hote pleasant – sit on deck.

I skipped the entry for Thursday, 18 February, which was minimal, because Miss Riggs and party spent all day not doing anything at all at Keneh. One of the paddlewheels on the Benha was broken and they had to wait around for it to be repaired. Why they didn’t use the time to pay a visit to the nearby temple at Dendara is a mystery.

Friday they push on to Luxor. The entry for that day includes pages of description at Karnak, which I am not transcribing because, as we established at Alexandria, Miss Riggs knows nothing of Egyptian history. Anything she writes must be cribbed from her guidebook.

What’s of more interest here is the further mention of the English royal party. Miss Riggs and company have a great interest in them. Understandably so. It must have been a huge source of excitement to discover that the other English party on the Nile at the time was the Prince and Princess of Wales. (Miss Riggs carefully copies into her diary the names of the Royal party as listed in Mustapha Aga’s book.) However, the joy was not mutual. Travelling as part of the Prince’s retinue was William Howard Russell, a war correspondent of some renown attached to the London Times. He afterwards reported that Cook’s party had been in “full cry up the river after the Prince and Princess”. He was scathing of Cook’s clients, who he considered had been inappropriately “thrown off their balances by the prospect of running the Prince and Princess of Wales to earth in a Pyramid, of driving them to bay in the Desert, of hunting them into the recesses of a ruin”.

Incidentally, also among those making up the Royal party was the watercolourist Oswald Walters Brierly, who was along to document the journey. He produced a series of paintings, several of which are below. The originals are part of the Royal Collection. 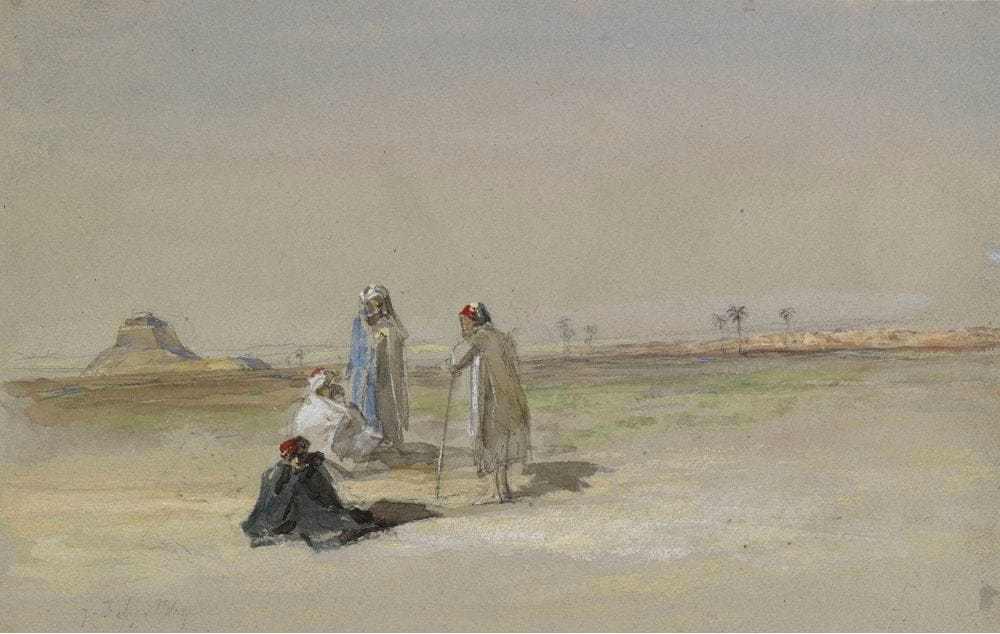 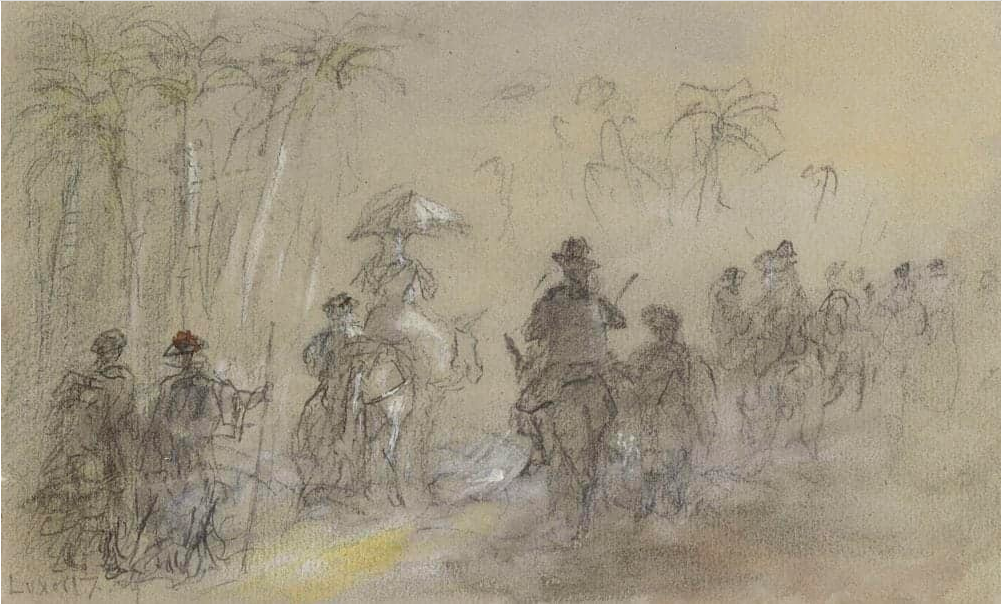 Royal party visiting the Valley of the Kings, 17 February 1869

3 Responses to Luxor at last