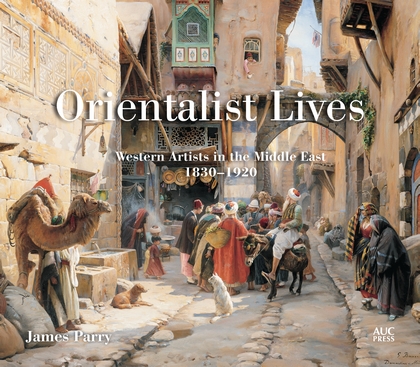 It’s been around for a little while, but I’ve just reviewed James Parry’s Orientalist Lives: Western Artists in the Middle East 1830–1920 for UK art journal The Burlington Magazine. Even if James wasn’t a personal friend (and the book’s publisher, AUC Press, also the publisher of my books), I’d still have given it a rave review. The book covers a lot of the same ground as Grand Hotels, namely Westerners in Egypt (and in James’s case, in North Africa and throughout the Middle East) in the 19th and early 20th centuries, and what they got up to. But whereas in my books I’m mainly writing about tourists and journalists, James focuses on the artists. He’s really good on the practicalities of life on the road for a budding Orientalist, whether it is house-hunting in 19th-century Cairo, the pros and cons of adopting native dress, or the difficulties of over-coming local suspicion when recruiting models – which the English painter John Frederick Lewis attempted to get around by purchasing an Abyssinian woman he liked the look of. The choice of illustrations is excellent, particularly the inclusion of many little-seen self- and group portraits from the artists’ sketchbooks, which have a breeziness and sense of fun badly lacking in the works the same artists produced for public consumption.

In the epilogue James writes about the fortunes of Orientalist art over the last half century, noting how it spent much of the 20th century out of favour, hidden in storerooms and basements, but how it’s now making headlines in the auction salesrooms, largely thanks to the interest from collectors in the Arab world. In fact, Egyptian businessman Shafik Gabr funded the research and production of this book, and it draws heavily – although far from exclusively – on paintings held in the Shafik Gabr Collection. The only shame is, like many AUC Press titles, you need to have Gabr-like amounts of money in order to buy this book.