Every visitor to Egypt goes to see the Pyramids, but at one time that wasn’t enough: you had to climb them too. The ascent was not particularly difﬁcult, only tiring. Detailed advice was given in Baedeker’s guide to Egypt: “The traveller selects two of the importunate Bedouins by whom he is assailed, and proceeds to the NE corner of the Pyramid, where the ascent begins. These strong and active attendants assist the traveller to mount by pushing, pulling, and supporting him, and will scarcely allow him a moment’s rest until the top is reached. Persons inclined to giddiness may ﬁnd the descent a little trying, but the help of the Bedouins removes all danger. Both in going and returning the traveller is importuned for baksheesh, but he should decline giving anything until the descent has been safely accomplished.”

In later editions of Baedeker the number of Bedouin required for the ascent was upgraded from two to three: one holding each hand and pulling, and a third pushing from behind. Mary Georgiana Emma Seymour Damer, an English lady traveller of means, described the scene in her Diary of a Tour in Greece, Turkey, Egypt and The Holy Land, published in 1841: “I ascended the last, having the assistance of six arms to my share. Minney appeared to ﬂy up the Pyramids, and her arms looked as if they would be drawn out of their sockets by her two wild Arab attendants. She was closely followed by Christine, her father, and the doctor, the latter of whom did not appear to ﬂy, but presented the image of a pinioned criminal on the rack. The whole effect was so ridiculous, as sadly to diminish our expectations of the sublime.” 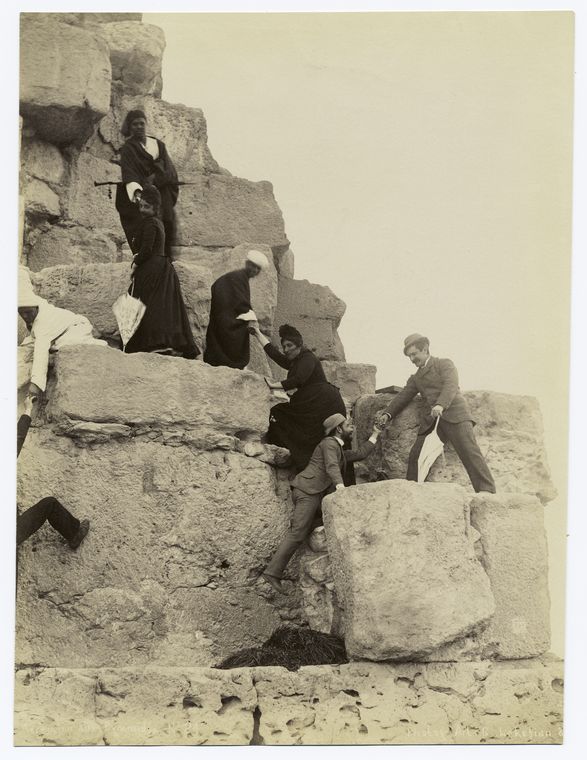 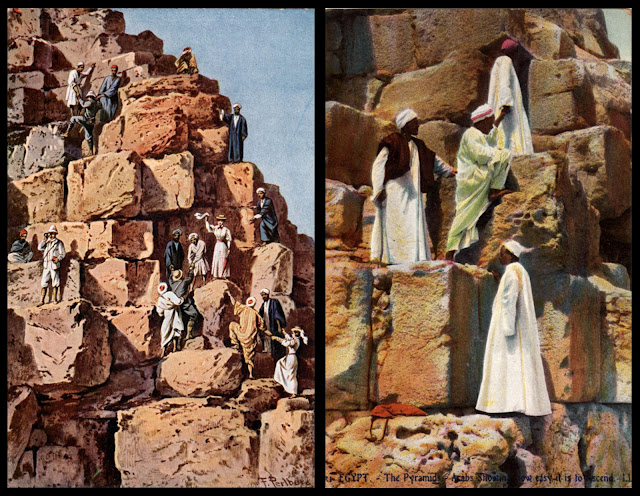 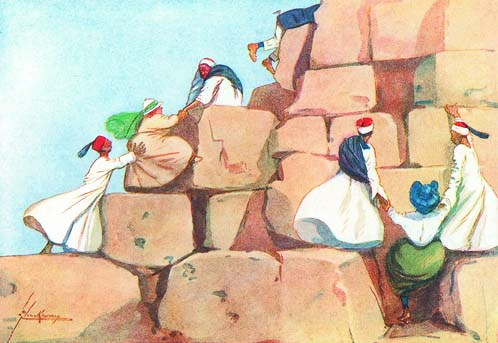 Once the top had been reached most visitors found it necessary to record their accomplishment for posterity by carving their name or initials into the stone (all the while keeping at bay the vendors of spurious antiquities who were present in just as great numbers at the summit as they were around the base of the Pyramid). This was a long-established practice and as far back as 1840, Usborne’s guide to Egypt was complaining that the summit of the Great Pyramid was so covered with grafﬁti that it was “difﬁcult for the newcomer to ﬁnd a place free in which to write their own name”. Some parties climbed with hampers and picnicked on the summit; the British Consul-General George Baldwin in the 1770s drank a toast up top to the union of the Thames, Nile, and Ganges, while his daughter danced a quadrille; a young Englishman named Maze in 1831 ﬂung himself off in a suicide attempt (successful); the Prince of Wales and Duke of Windsor, in 1928, drove golf balls toward the golf links far below.

Climbing the Great Pyramid remained an essential Egyptian experience until the mid 1960s, when the Egyptian government banned it on the grounds of safety; four or ﬁve climbers had been losing their footing each year and tumbling down the 51 degree incline to serious injury and even death. But with a bit of baksheesh tourists were able to continue climbing right up until the 1980s, which was when a clampdown saw the ban ﬁnally being properly enforced. Even now the reckless still creep across the Plateau by night and risk arrest in their attempts to scramble to the top. The Japanese, apparently, are the most persistent and consider it a challenge on a par with getting change out of a Cairo taxi driver. You can read an excellent account of modern-day Pyramid climbing here.