Thackeray at the hotels

Back last August, I blogged about the artist Lance Thackeray and promised to post more examples of his work. It’s a taken a while, but here we go – these sketches, all of which deal with hotel life, are taken from his 1908 book The Light Side of Egypt, along with the accompanying text. 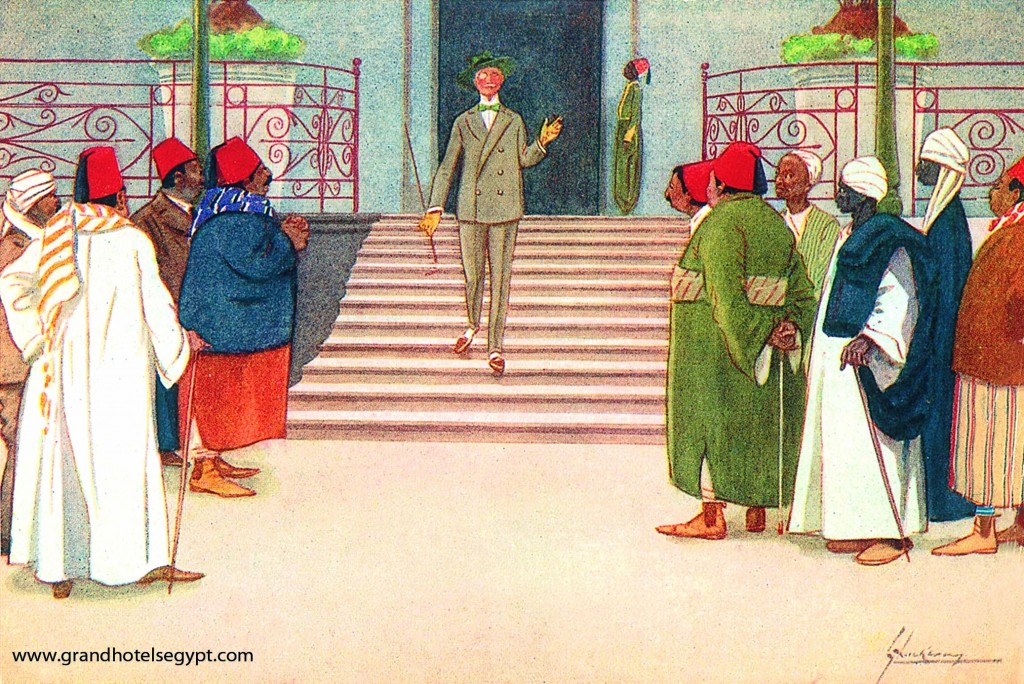 The Vultures
No one in Egypt gives you a more hearty welcome than the dragoman. He remembers his old friends, and beams upon the newcomers with childlike simplicity; he speaks English, and other languages, also American – sure! Put yourself in his hands and he will see you through. If you have money to burn he will fan the flame. His favourite hobby is collecting baksheesh, which includes a ten per cent commission on everything you purchase while in his company. This accounts for his passion for the bazaars. 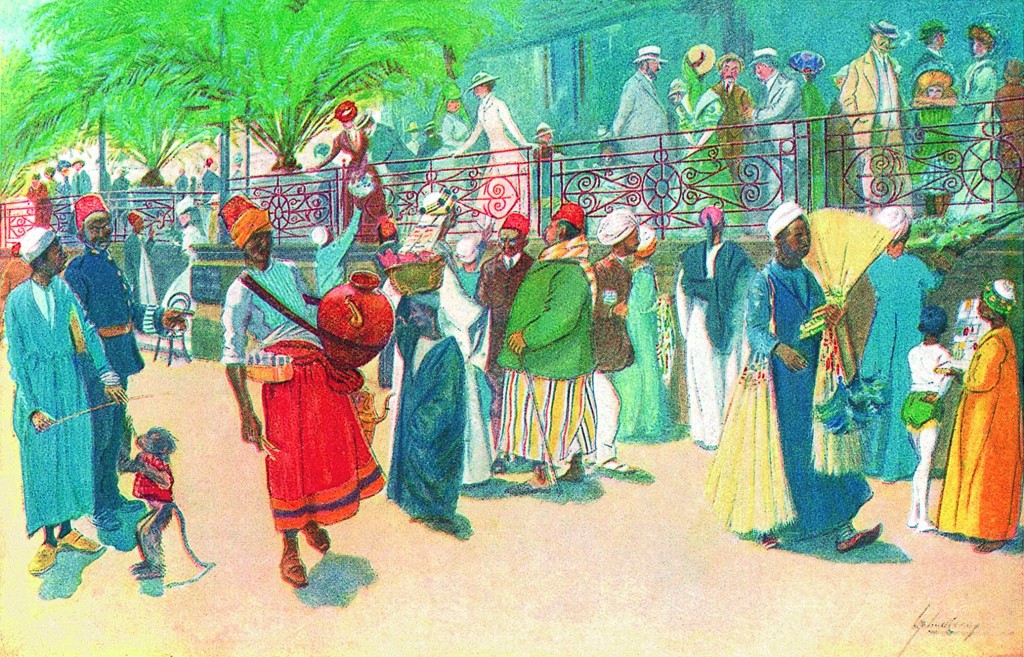 Cairo Curios, or the Shepheard’s Flock
No one could desire a more delightful way of spending an hour than to sit on the balcony of Shepheard’s Hotel and watch the curious crowd of natives who decorate the front in every imaginable costume. Millions of piastres must have passed through its balcony railings in exchange for the various articles which the natives hawk in the street below. Shawls, beads, scarabs, fly-whisks, stuffed snakes and crocodiles, and many other charms and horrors, are here bargained for and bought to decorate or disfigure our Western homes. 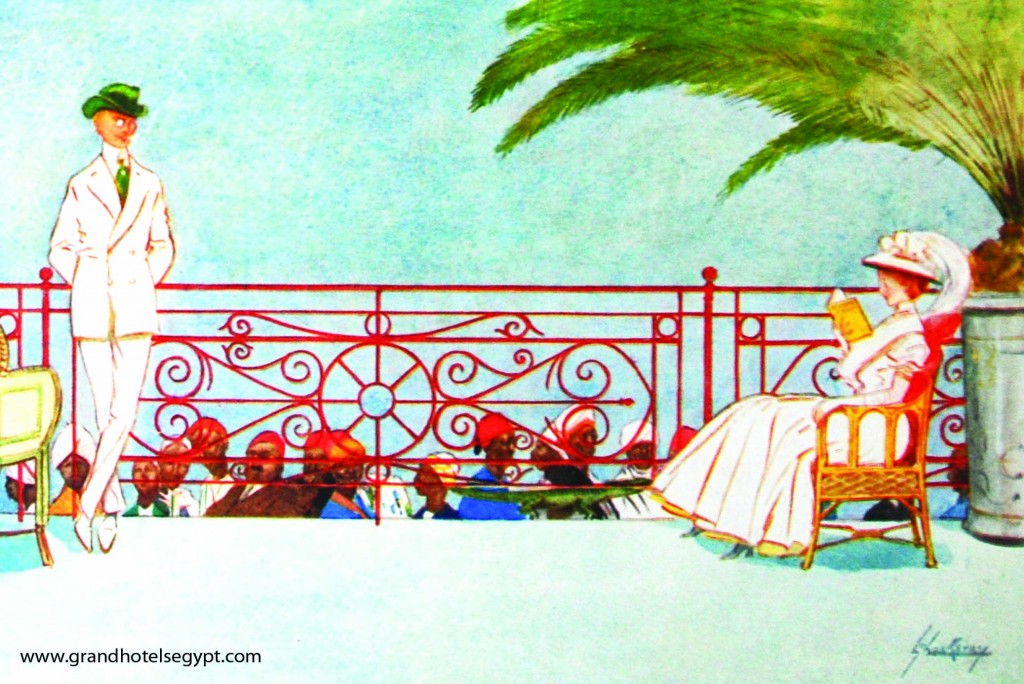 Romeo and Juliet, or the Balcony Scene at Shepheard’s Hotel
The balcony of this famous hotel still remains the happy hunting ground of the tourist. It has been the scene of many delightful comedies, and more than one tragedy. The beginning of many a love story, and also the end. The arrival of some new beauty will send a flutter through the hearts of the male portion of the visitors, and arouse the susceptibilities of the resident soldier; she will be come the Juliet of the balcony, but with more than one Romeo; and when she at last boards her train at the station, a sigh of relief goes up from the mothers of rival daughters, and the pulse of the Turf Club returns to normal. 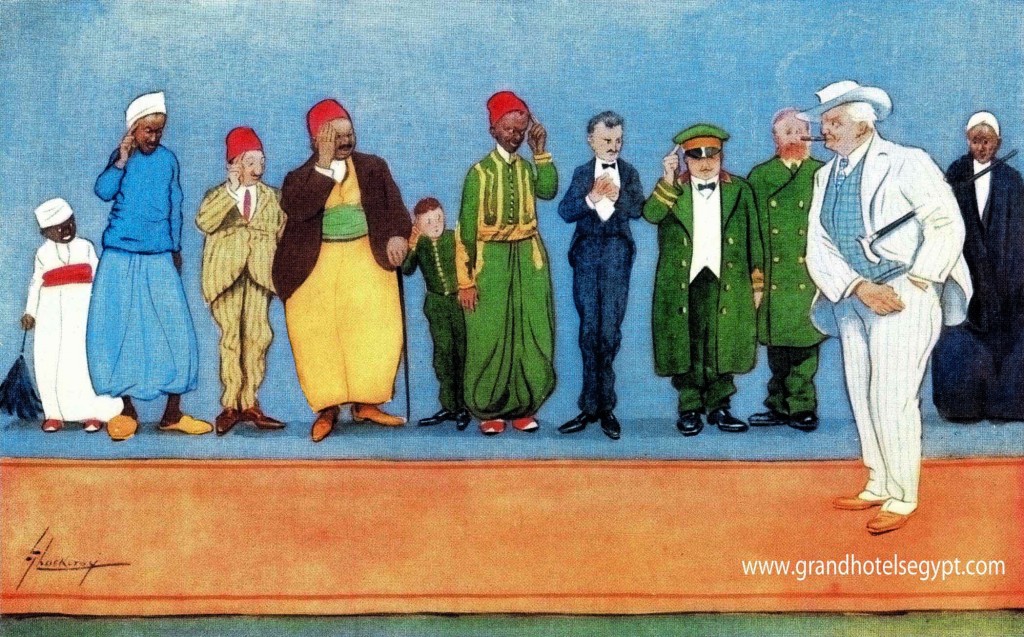 The Parting Guest
Any lack of attention which may have shown itself during your stay at the hotel in this country is thoroughly made up for by the extraordinary amount of it which is wasted on you during the day of your departure. You will, no doubt, have provided yourself with a good handful of loose change for those servants who have become familiar obstacles; but you are not prepared for the sudden attack of civility which greets you around the hotel entrance. It is no use looking over their heads, or putting on a far-away expression, as they are sure to trip you up. So pay up and try to look pleasant. 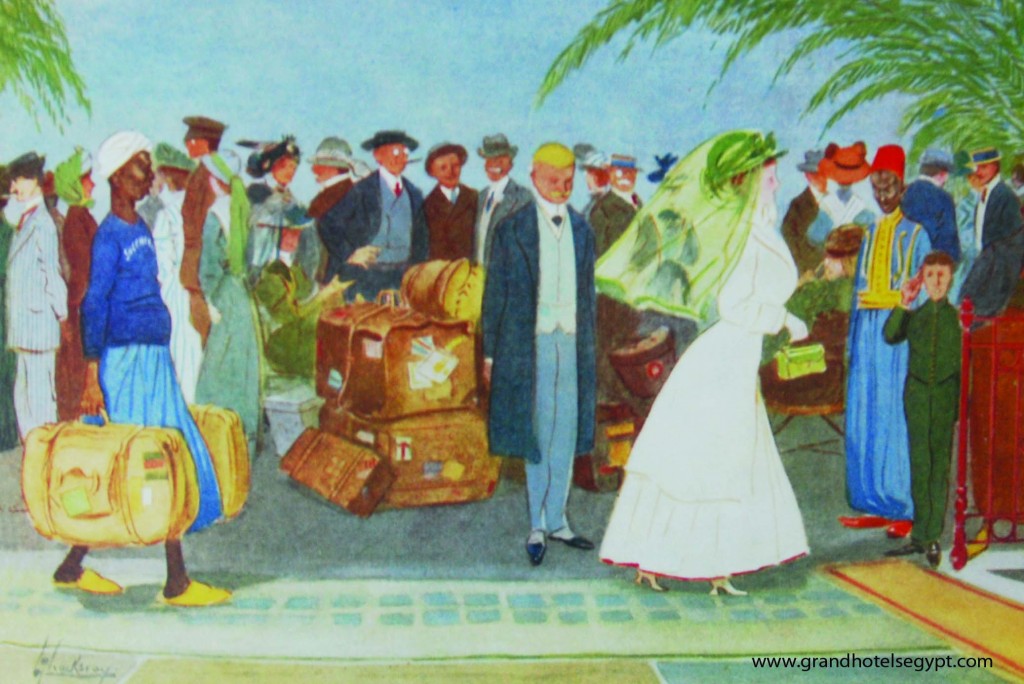 Globe Trotters
It is the hour of the departure. Men and women, from all quarters of the globe, are busy shaking hands, exchanging cards, and pressing cordial invitations upon each other to distant and impossible parts of the earth. The American blonde walks down to her ’bus with a supreme air of indifference and importance, holding fast to her bag, leaving along line of males guessing their chances of meeting on the steamer. The hotel manager stands deferentially by receiving the congratulations and au revoirs of his best customers, and the keen-eyed dragomans rush in for a farewell handshake with their old clients.