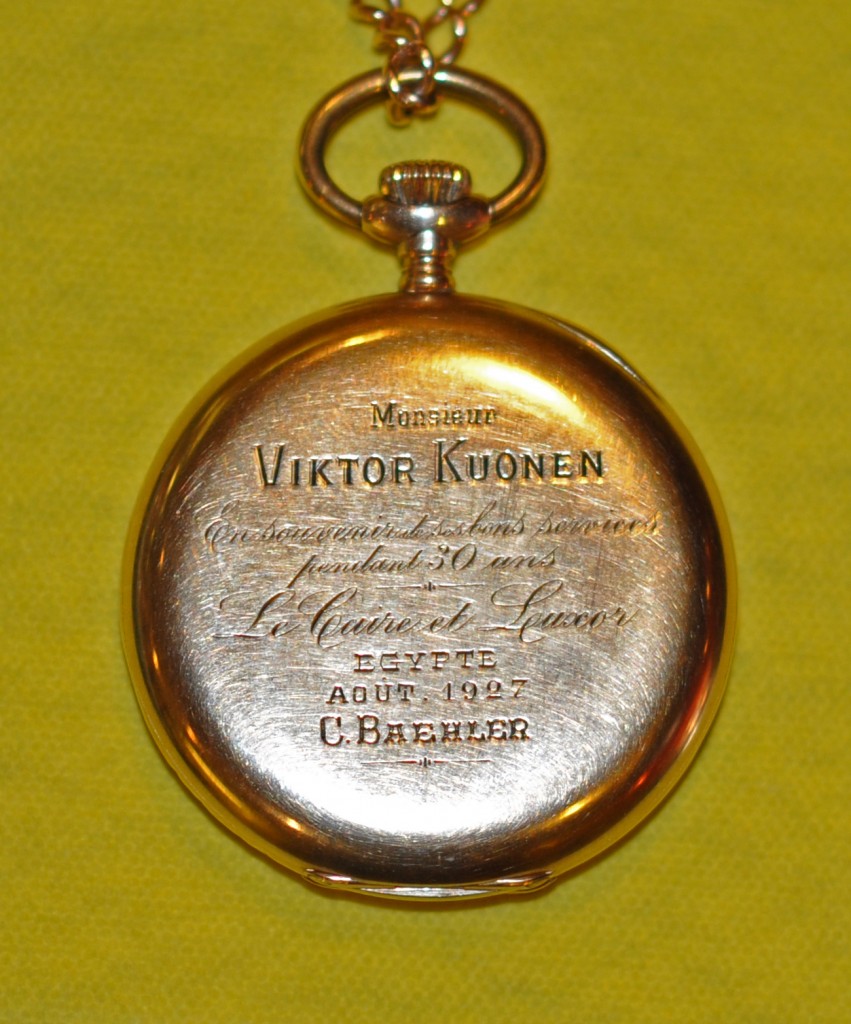 Aha! Just received confirmation from Peter Kuonen that the painting in my post before last was indeed by Tony Binder. Thank you again, Peter. 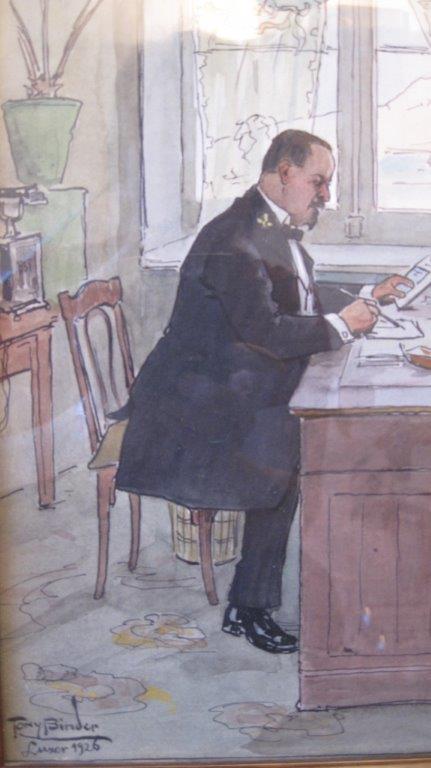 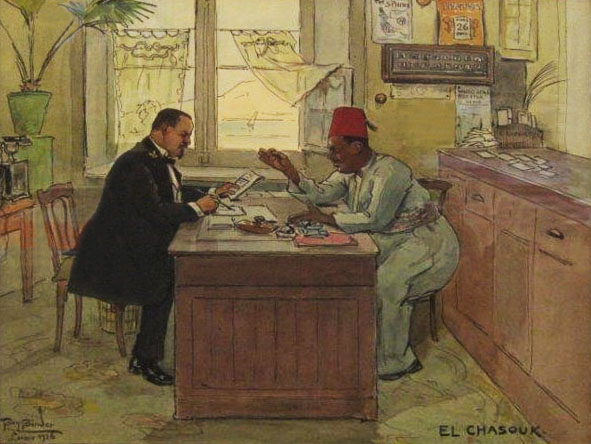 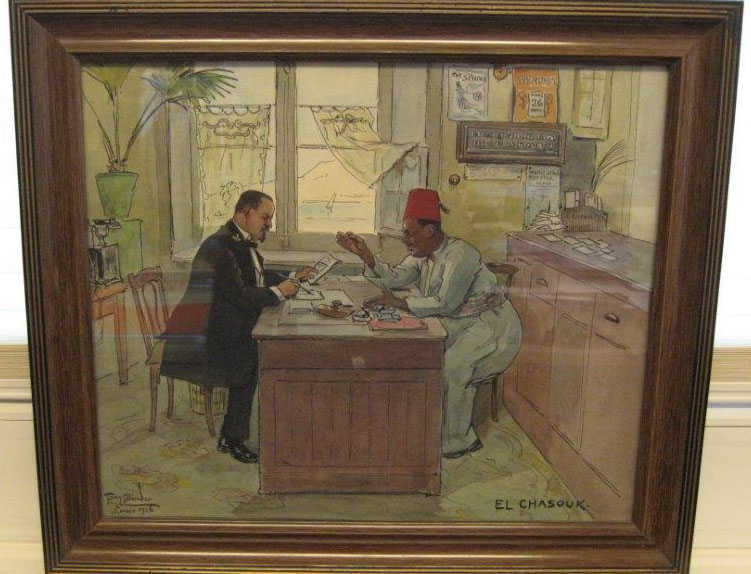 I was recently contacted by Peter Kuonen of Urdorf in Switzerland, who wondered if I would be interested in seeing some photographs of his grand-uncle, Victor, who spent more than 20 years employed at Luxor’s Winter Palace, and before that Shepheard’s, in the early years of the 20th century. Of course I was interested. So Peter sent me the photographs and they are wonderful – he’s permitted me to post some of them, below. I also asked Peter if he could tell me a little about Victor, and he responded with the text that follows. 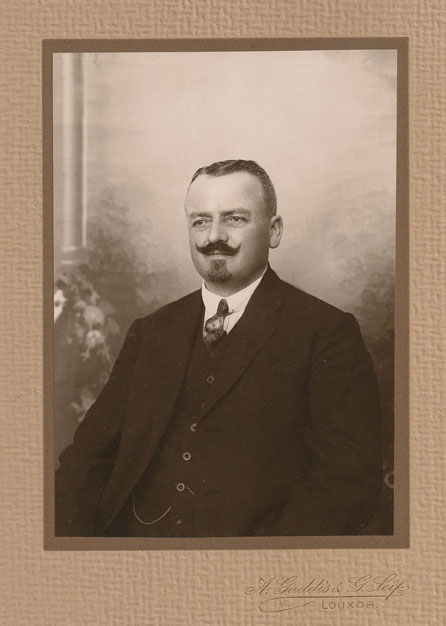 “Victor was born on May 4, 1875 in a small mountain village called Guttet in the picturesque canton of Wallis in Switzerland. He grew up together with five sisters and fourteen brothers. After completing his compulsory schooling he had to help to support the family. Therefore, he went to work in a hotel at the age of 16 years. As a young man, he already had jobs in different cities like San Remo, Basel and Lucerne. In 1897, aged 22, he travelled to Egypt for the first time. He sent back travel reports, which were published in a local Wallis newspaper Briger Anzeiger from February 1902 onwards. His first report described the trip from Switzerland via Genoa to Port Said. He not only wrote what he had experienced on the trip but also about the people and the land of Egypt. He continued to file reports right up until 1923 and his most interesting are now preserved in the archives of the Canton Valais.

“He found employment in Egypt in the first-class hotels, including Shepheard’s in Cairo and the Winter Palace in Luxor – both hotels owned by fellow Swiss Charles Baehler. 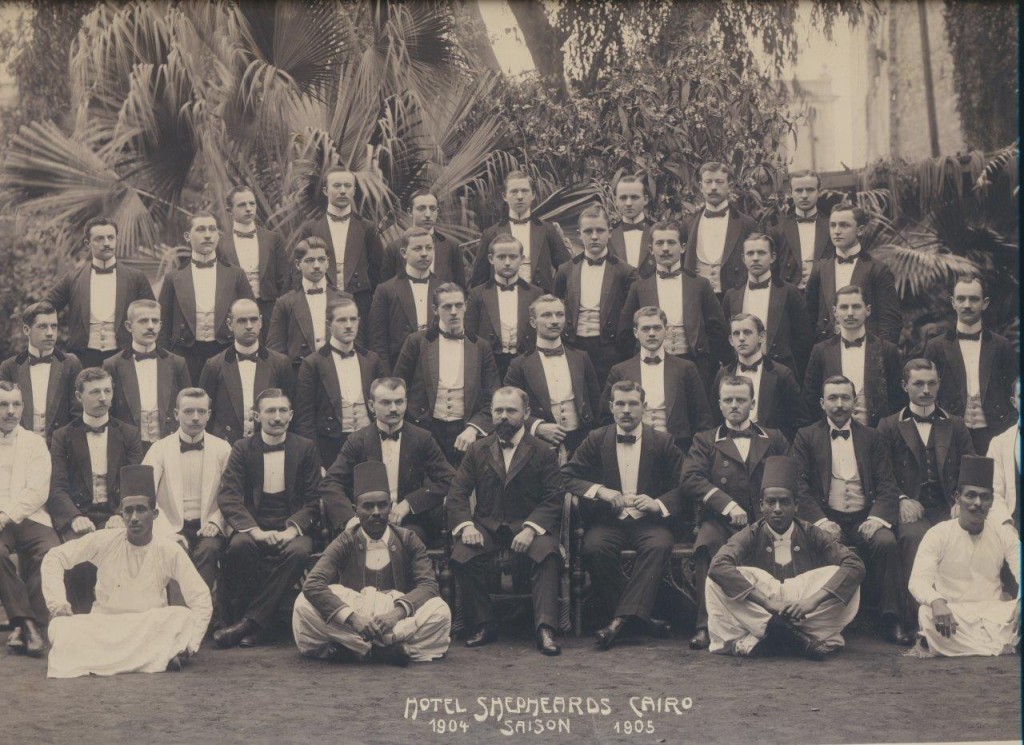 “Victor worked in Egypt during the winter (which was Egypt’s prime tourist season) and returned to Switzerland or Germany during the summer. In Switzerland, he worked in the Hotel Mont Cervin, Zermatt and in the Hotel Schweizerhof, Lucerne. In Germany, he was a concierge in the Hotel Europäischer Hof, Baden-Baden where he met his wife Sophie Mohl. They had three more sons and one daughter. 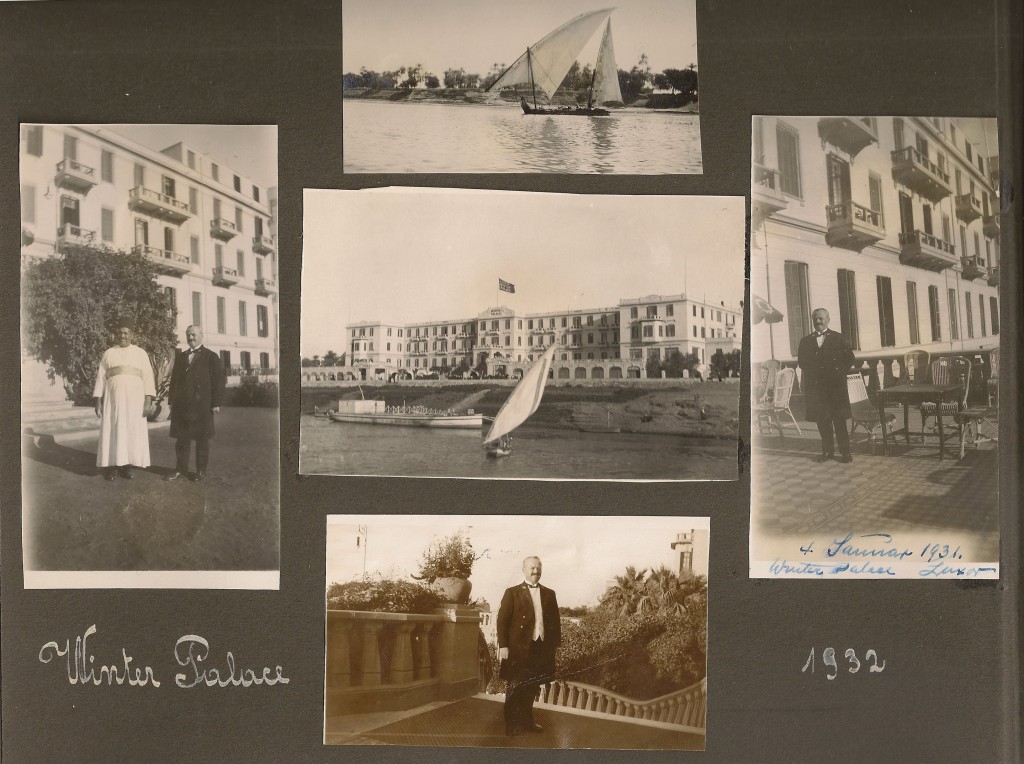 Victor at the Winter Palace in 1932 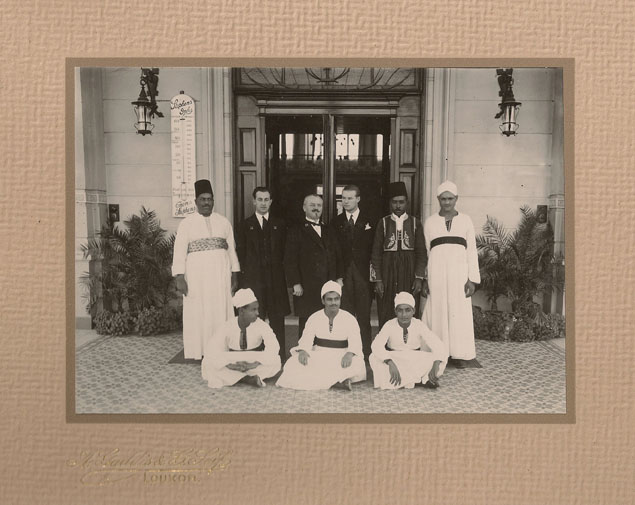 Victor outside the main entrance of the Winter Palace. The photo has been taken by Attaya Gaddis, who had one of the shops in front of the hotel; it’s now run by his grandson Ehab 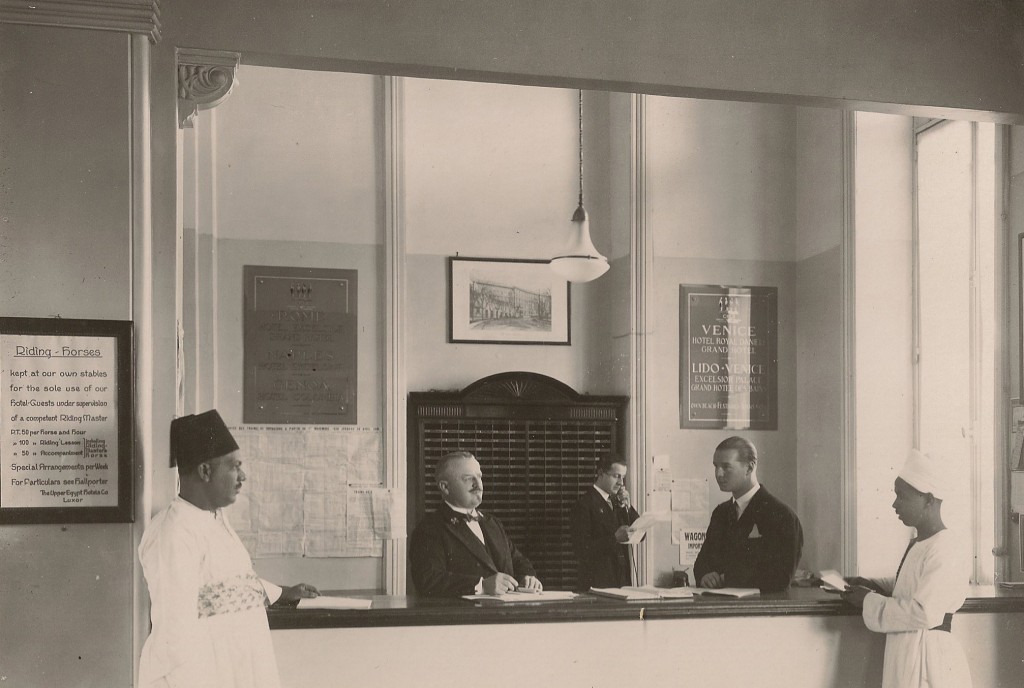 At the Winter Palace reception desk 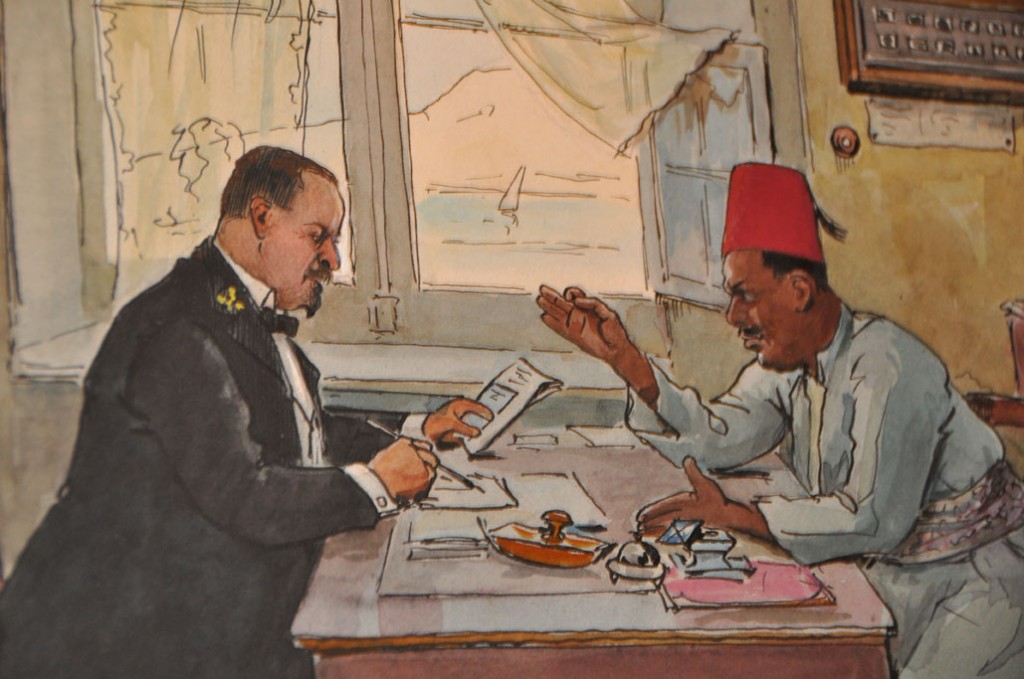 An illustration of Victor, presented to him as a gift. I can’t be sure but it looks like the work of Tony Binder, who I have posted about previously, here

“In 1927, after working 30 years for Charles Baehler, – during which time he was present in Luxor when Tutankhamun’s tomb was discovered – Victor received a Diploma of the Swiss Hotelier Association and also a gold watch with a dedication from Baehler. 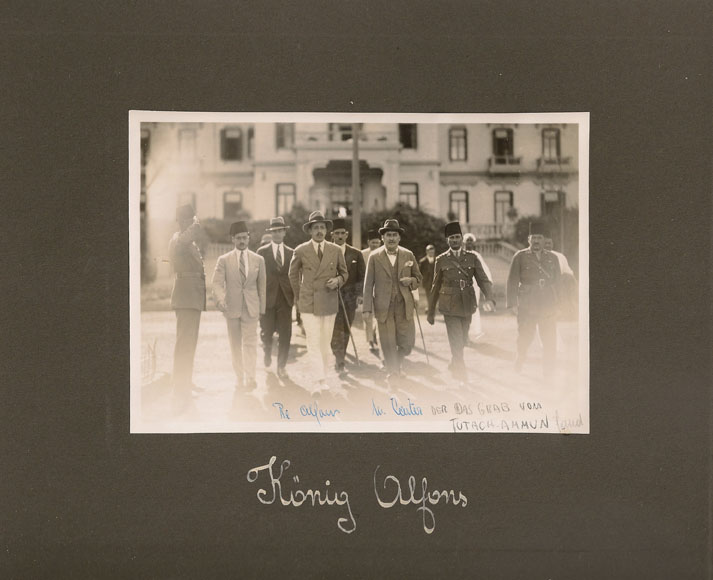 Leopold and Elizabeth of Belgium at the Winter Palace

“Victor said good-bye to Egypt in 1931. He moved with his family to Algeria, where his second-oldest son, Oscar, had a job in a hotel. They settled in the coastal town of Bône (today called Annaba), where Victor opened a restaurant, Au Rosbif. The family ran this for about 10 years but then World War II came along and they packed up and returned to Switzerland. Back in his homeland, Victor bought the Hotel Mont Cervin in Visp/Wallis in 1941 and was a successful hotelier for the next 8 years until he died on October 13, 1949.”